X
This site uses cookies to provide and improve your shopping experience. If you want to benefit from this improved service, please opt-in.
More Info
Accept Cookies
80's Casual Classics80's CC NostalgiaEverything You Need To Know About The adidas Forest Hills Trainer
Menu 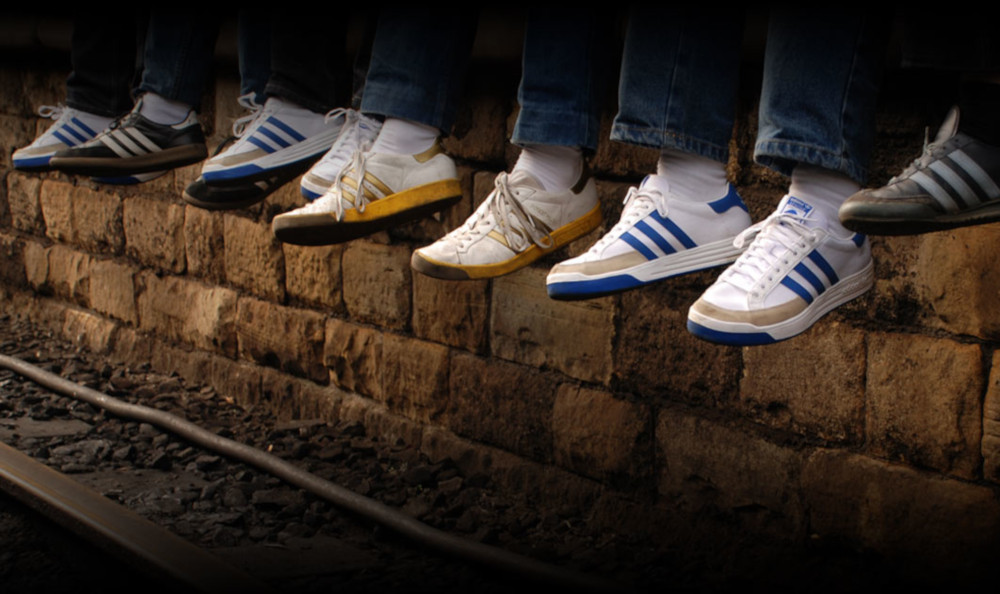 Everything You Need To Know About The adidas Forest Hills Trainer

Arguably one of the most iconic 3 stripes trainer from the original casual era, the adidas Forest Hills trainer now makes a grand return in some updated colourways.

“Come ‘ead Carty La”, are the words some of us may conjure up when we think of the adidas Forest Hills. Not only the Liverpool slang connection but also the fact the trainer heavily featured in Pat Holden’s ‘Awaydays’ from 2009, a British film about casual culture and the Tranmere Rovers hooligan firm based on Kevin Sampson’s book of the same name. However, before the wedge haircuts, the green Peter Storm cagoules and Lois cords were seen strutting about the train stations and pubs, the Forest Hills had absolutely nothing to do with the North West. It was a well ventilated, lightweight performance tennis shoe that also incorporated NASA technology into the footbed. Just like a lot of the clothes and trainers picked up by the original casuals it does sometimes make you wonder how the two ever really connected? Or was it just a mutual love for designer sportswear? The best trainers money could buy and the whole elitist appeal that came with the casual era. 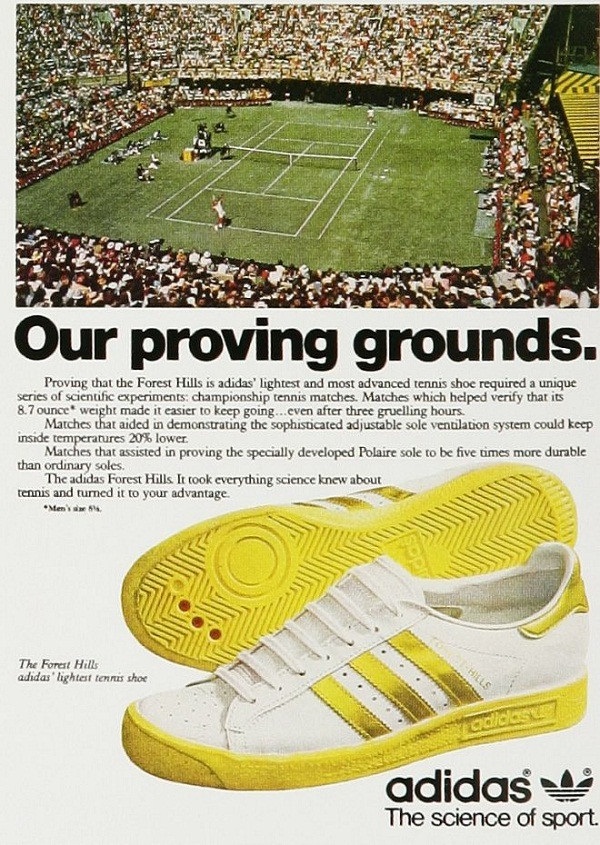 Above: Our proving grounds. An original adidas Forest Hills trainer advert highlighting how lightweight the shoe was.

After previous tennis trainer icons like the Stan Smith, adidas looked to really push the boundaries of trainer technology and performance with the Forest Hills. First released back in 1976, the tennis trainer took its name from the Forest Hills area of Long Island New York and the home of the Forest Hills stadium which played host to major grand slams such as the US Open back in the 1970s. Just like other notable adidas tennis silhouettes like the Stan Smith, the Grand Slam and the Lendl Advantage, the Forest Hills was also a multi surface shoe. Built for speed and traction, the Forest Hills boasted a NASA designed footbed for superior performance, perforations for breathability and was famously worn by the tennis elite of the late 70s era. Its contrasting yellow sole unit and gold 3 stripes looked like nothing ever seen before as far as trainers were concerned and is still regarded as one of the greatest tennis shoes of all time. 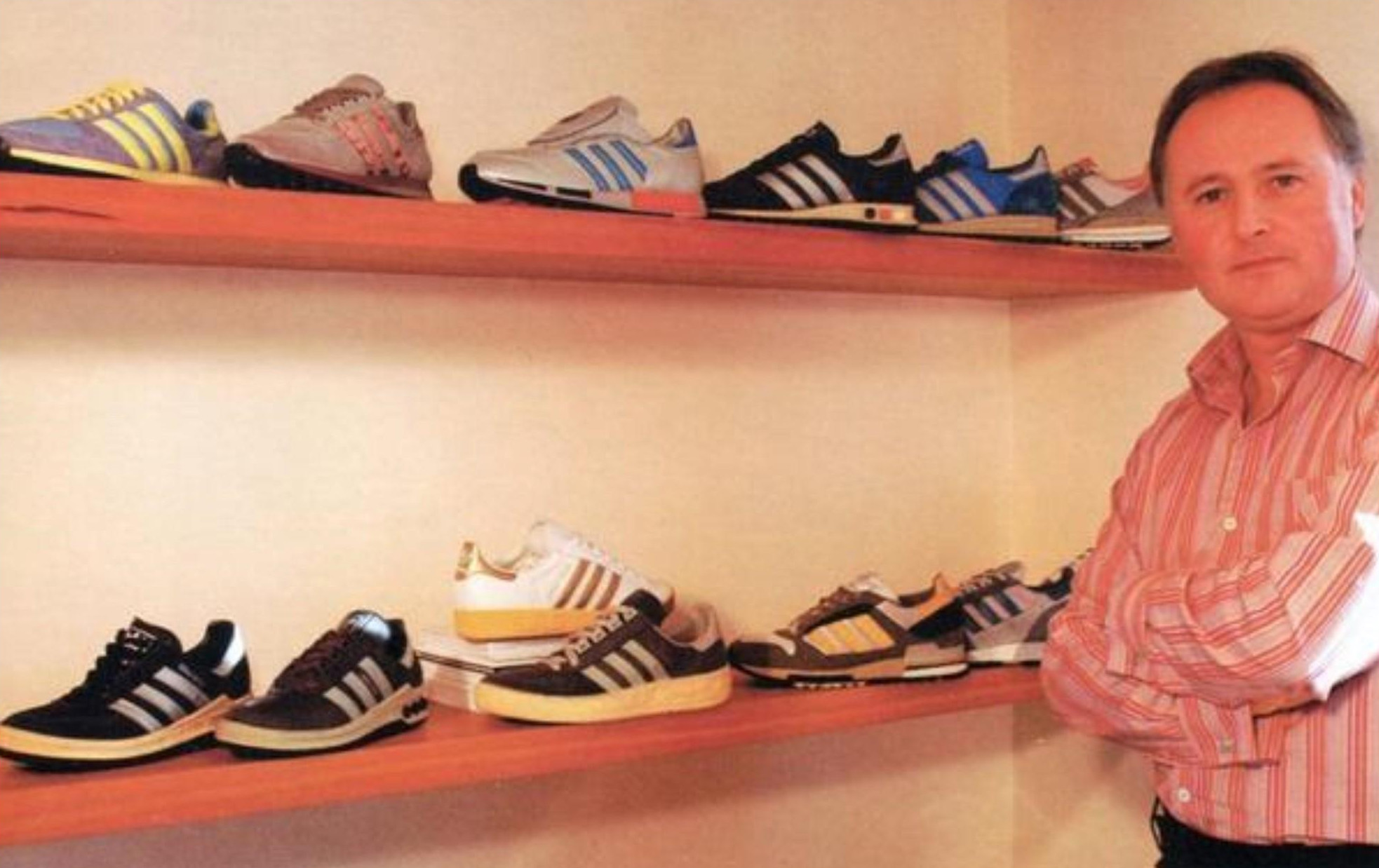 Above: Cashing in on the casuals. Wade Smith pictured with his collection of adidas including the Forest Hills.

As the casuals brought back designer sportswear and unknown adidas styles back to the UK, it was retailers like Wade Smith in Liverpool that introduced styles like the Forest Hills to the North West with the 3 stripes entrepreneur claiming to have sold over 110,000 of Trimm Trab’s back in the 80s. Smith put the Forest Hills up there as one of the most sought after casual 3 stripes styles, cashing in on the casuals and pumping 3 stripes fever into the heart of Merseyside for generations to come. 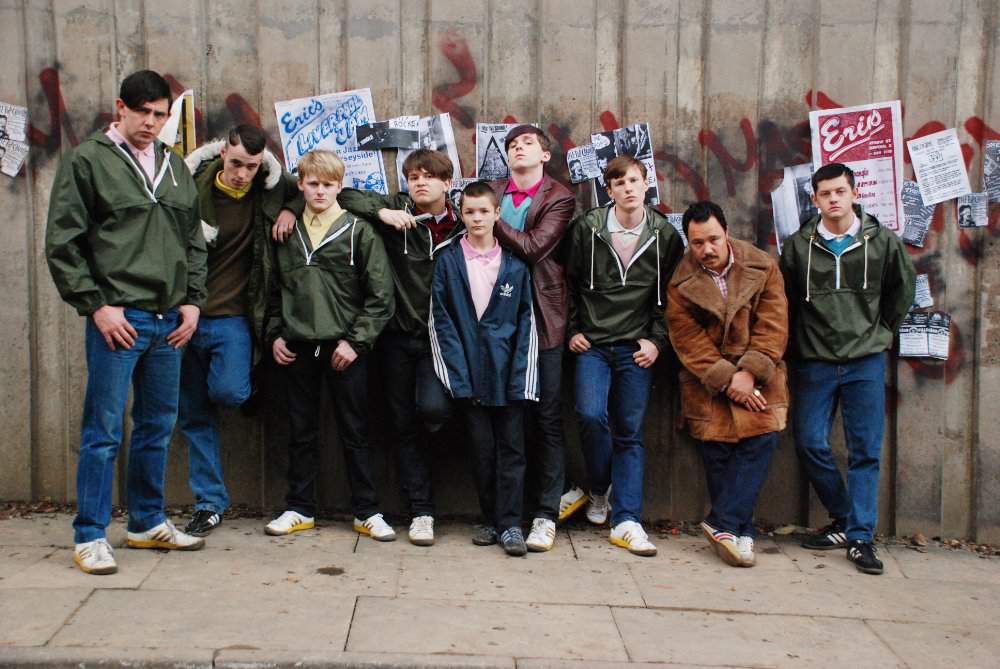 Above: Carty La. The cast from Awaydays (2009) wearing classic adidas trainers such as the Forest Hills.

A new generation of trainer fans were given a taste of the original North West casual style thanks to Kevin Sampson’s Awaydays which was brought to life in 2009. The story features a bromance between Elvis and Carty who are involved in the hooligan element of Tranmere Rovers. The Forest Hills is a key adidas style featured throughout with the story highlighting how quickly the casual look had spread around the North West whilst rival firms are still seen wearing the original skinhead look. The film also revived the Forest Hills, bringing back the original tennis silhouette for adi fans old and new. 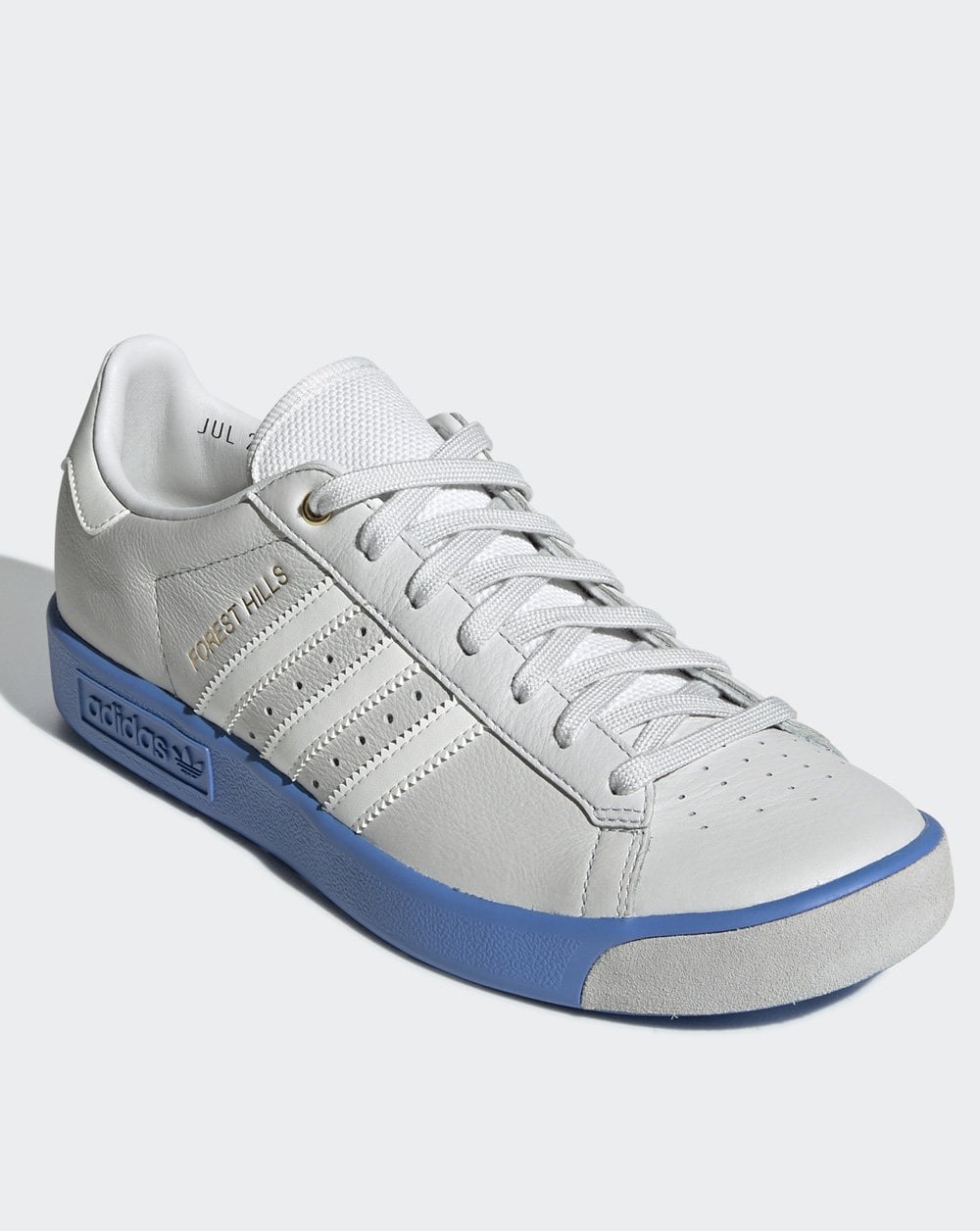 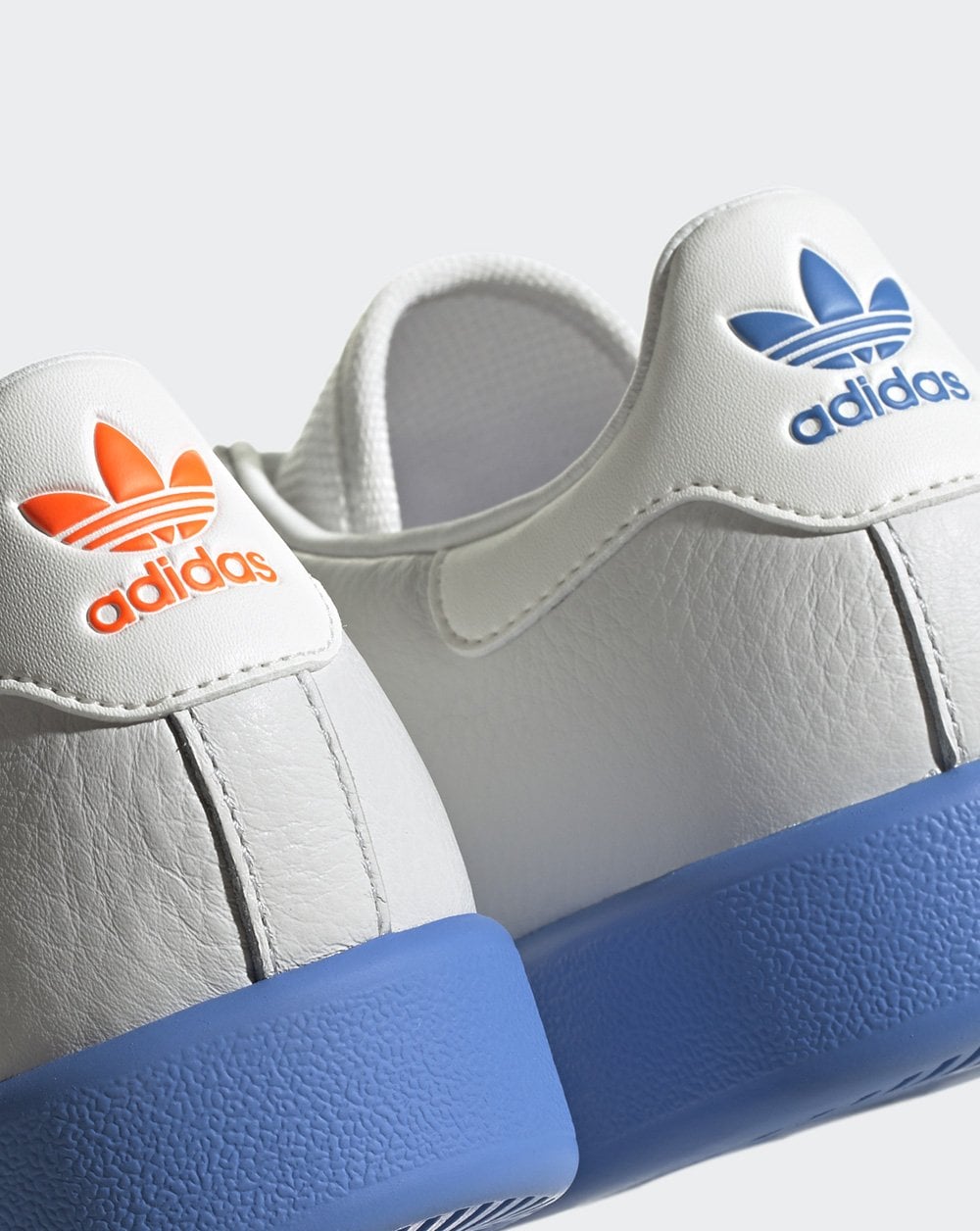 The Forest Hills is now revived again with the introduction of a fresh new crystal white/real blue colourway to 80s Casual Classics. Available to pre-order for July delivery the latest version features all the original hallmarks of the legendary tennis shoe with perforated white stripes running down each side, premium leather uppers, FOREST HILLS branding in silver foiling and original trefoil branding to the heel tab.