X
This site uses cookies to provide and improve your shopping experience. If you want to benefit from this improved service, please opt-in. Cookies Page.
Accept Cookies
80's Casual Classics80's CC NostalgiaHow Wade Smith Cashed In On The Casuals, The Scallies & The Ravers
Menu

How Wade Smith Cashed In On The Casuals, The Scallies & The Ravers

The Wade Smith store in Liverpool was one of the first places in the UK to get rare adidas at the height of the casual scene.

Back in the early 80s there wasn’t Instagram to check out the latest drops or even raffles now, and there wasn’t really a global trainer scene anything like we know it today. If you wanted the latest Forest Hills, Trimm Trab’s or ZX styles, it was word of mouth back then. Some sportswear stores did stock some of the original casual styles, however it wasn’t really targeted directly at the casual subculture. Before the likes of Wade Smith in Liverpool anything adidas at the time was really sold as performance sportswear in the big sportswear chains.

A sportswear and golf store called Hurleys in Manchester gave Wade Smith the inspiration to go it alone in 1982. Although catering for the traditional golfer, Hurleys sold a variety of classic casual brands like Lacoste, Fila and adidas trainers which sold out within minutes due to the growing casual movement of the late 1970s and early 80s sweeping across the North West. Smith had previously worked for Topshop in Liverpool and saw a massive opportunity to cash in on the casual scene with young casuals looking to better each other with the latest sought after 3 stripes from Europe. With a growing demand for casual fashion and adidas trainers, Wade Smith opened his first store on Slater Street in Liverpool in the early 80s looking to cater exclusively for this new breed of casual sportswear lovers. 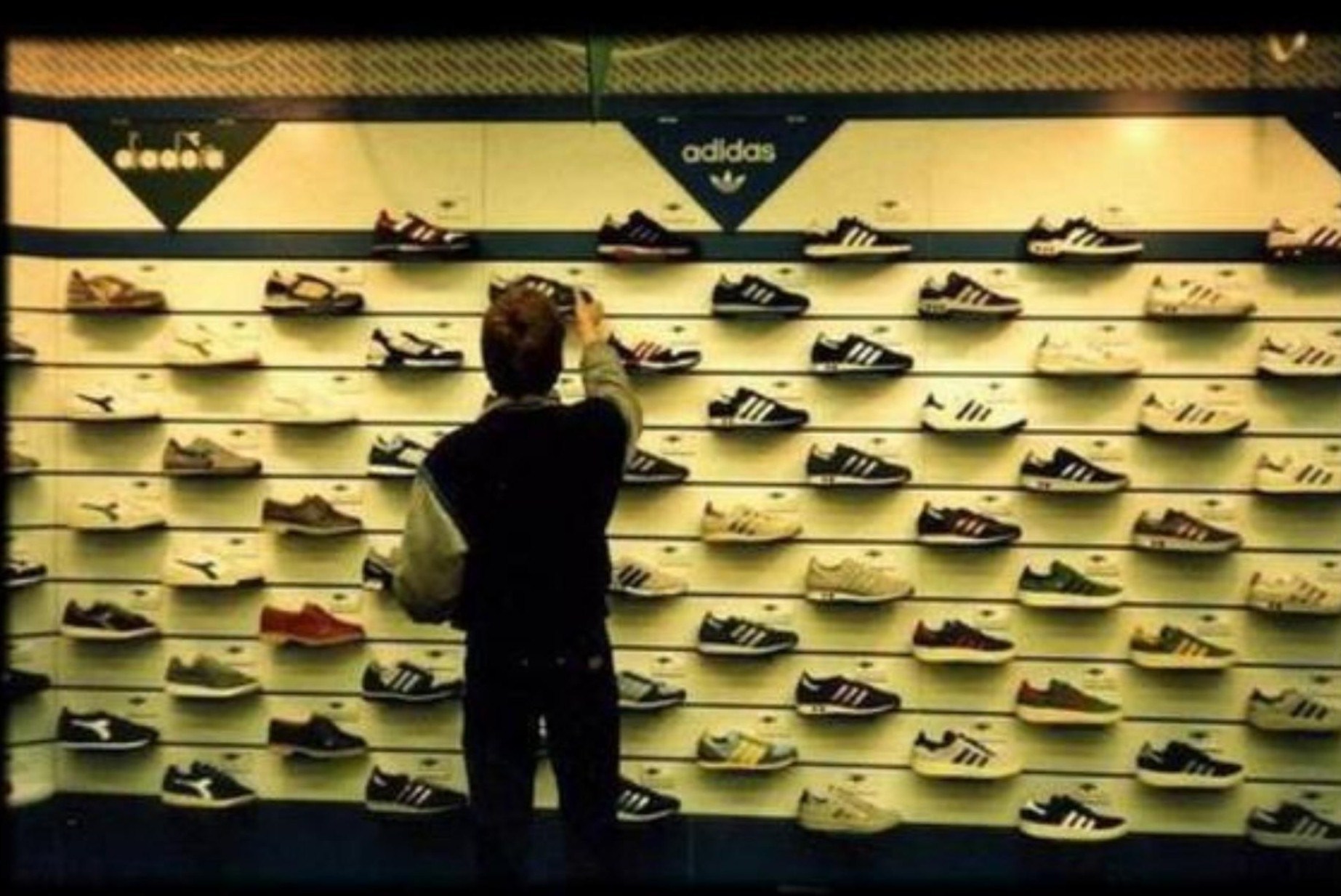 Above: A young casual checking out the latest 3 stripes styles at the Wade Smith Liverpool store back in the 80s.

Rumour has it, Smith set off in a van across Europe to source some of the rarest adidas he could find and with his retail knowledge and contacts, gave Liverpool a sportswear store and rare trainer experience like nothing before it. Wade Smith became something of a legend with young casuals popping in to purchase the latest 3 stripes styles on away days with supply and demand at the forefront of the exclusive ‘casual’ business.

Wade Smith didn’t just cash in on the original casual scene, he also cemented a love and admiration for all things 3 stripes in the city of Liverpool that is still probably stronger than anywhere else in the UK. 3 stripes and ‘trainees’ runs deep in Merseyside and Smith played a vital part in the 3 stripes Liverpool heritage. According to the Liverpool Echo Wade Smith shifted around 110,000 pairs of Trimm Trab’s throughout the 80s era. The rarer the import the better with Smith constantly taking regular trips to Europe to source everything from limited edition cagoules to adidas Grand Slams.

Above: An original advert for the opening of the Wade Smith sportswear store in Birkenhead, Merseyside.

As casual culture was quickly replaced with the Acid House scene and the chemical generation thanks to North West club’s like Manchester’s notorious Hacienda, Smith saw the changing times and looked again to cash in on the current subculture. Rave culture was now the thing with brands like Timberland, Kickers and bucket hats moving off the shelves as quickly as a pair of Forest Hills had done 10 years earlier. The mid 90s to early noughties saw a boom in scally fashion in the city, and the North West for that matter, with tracksuits and Nike Air Max 95‘s with Smith yet again looking to cash in on the latest subculture and trainer trends. 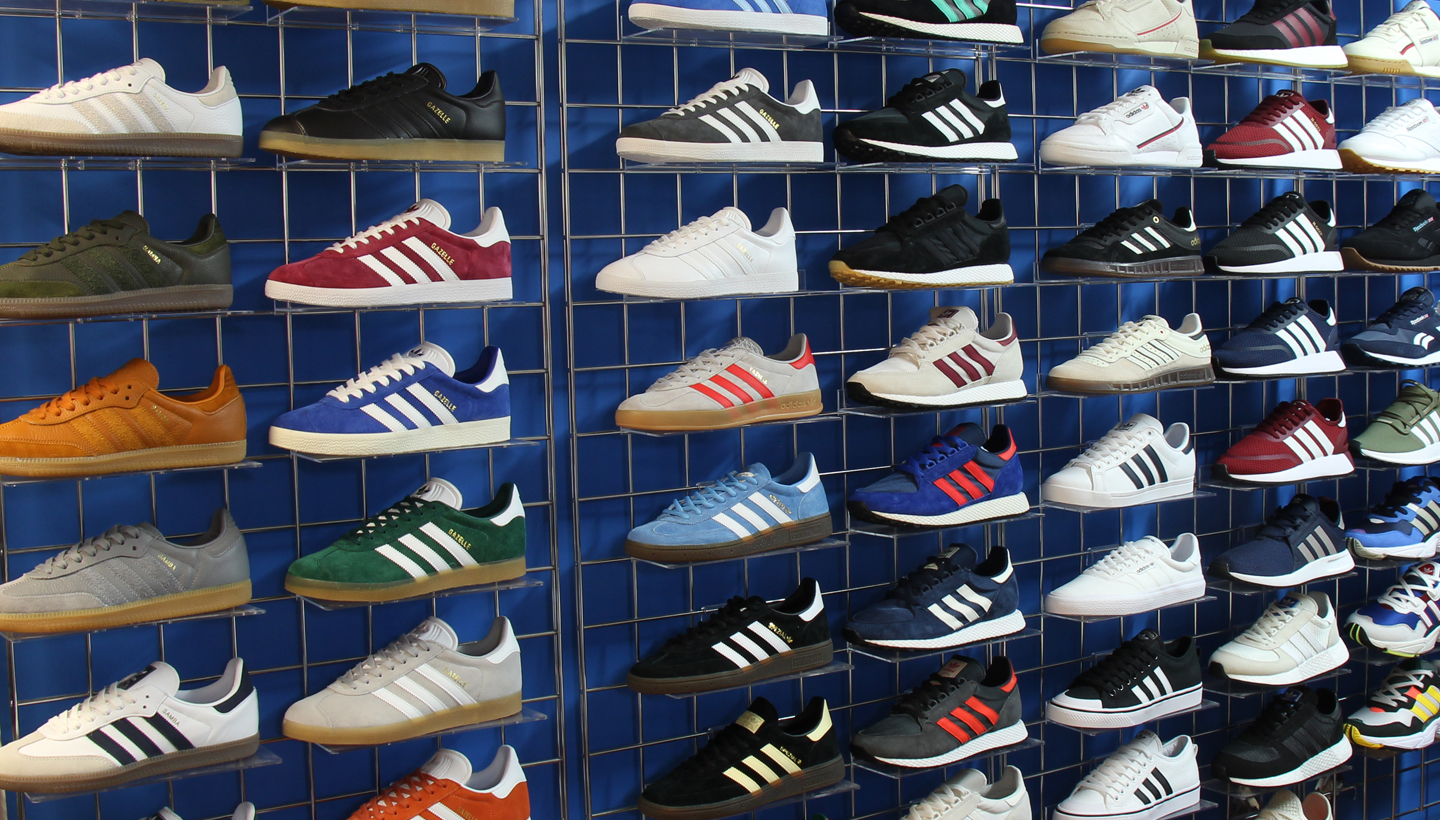 Above: The legacy of Wade Smith lives on at 80s Casual Classics with our massive selection of retro adidas trainer styles.

Although it closed in 2005, Wade Smith has become something of a legend to the city of Liverpool. From the original 80s casuals to the early 90s ravers, Smith knew what he was doing and wasn’t afraid to cater for their needs. You can shop our massive selection of casual sportswear from brands like Fila, Sergio Tacchini and adidas now at 80s Casual Classics.