X
This site uses cookies to provide and improve your shopping experience. If you want to benefit from this improved service, please opt-in.
More Info
Accept Cookies
80's Casual ClassicsTrainersThe adidas Jeans Trainer Gets The Neon Treatment With These Striking Colourways
Menu 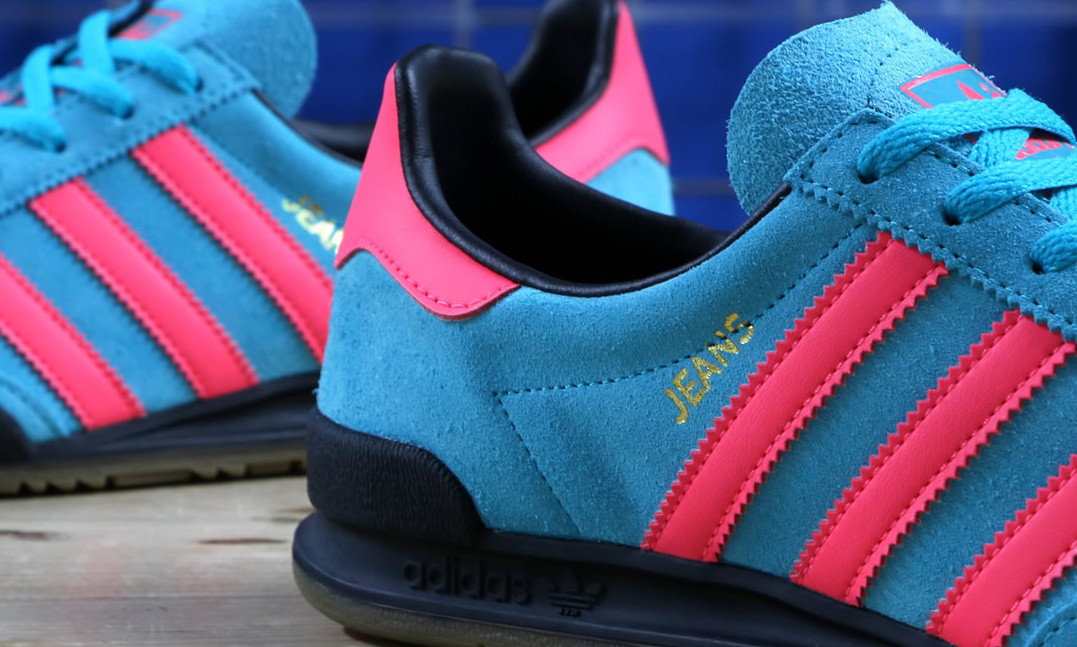 The adidas Jeans MKI trainer was first released in 1975 and was closely followed by the MKII in 1979.

When it comes to classic adidas silhouettes and selections we certainly don’t mess about here at 80s Casual Classics. When alls said and done its the classic stuff that always seems to get people talking, whether you were knocking about in the early 80’s or for those who are just discovering a new passion for the 3 stripes brand.

The adidas Jeans MKI trainer was originally released in 1975 coming in an all blue colourway, adopting the name ‘Jeans’ as the denim trousers with trainers look was becoming more popular. The Jeans MKI trainer adopted its slim line style from the SL range, with a strong resemblance to the likes of the SL72 which was released in celebration of the Munich Olympics in 1972. The adidas MKII Jeans trainer closely followed its predecessor, released in 1979 at a time when casual culture was sweeping the nation. The main notable difference on the MKII trainer was the signature heel stabiliser and sole unit, with the style going on to become an 80s classic as well as the most popular and well known of the two. 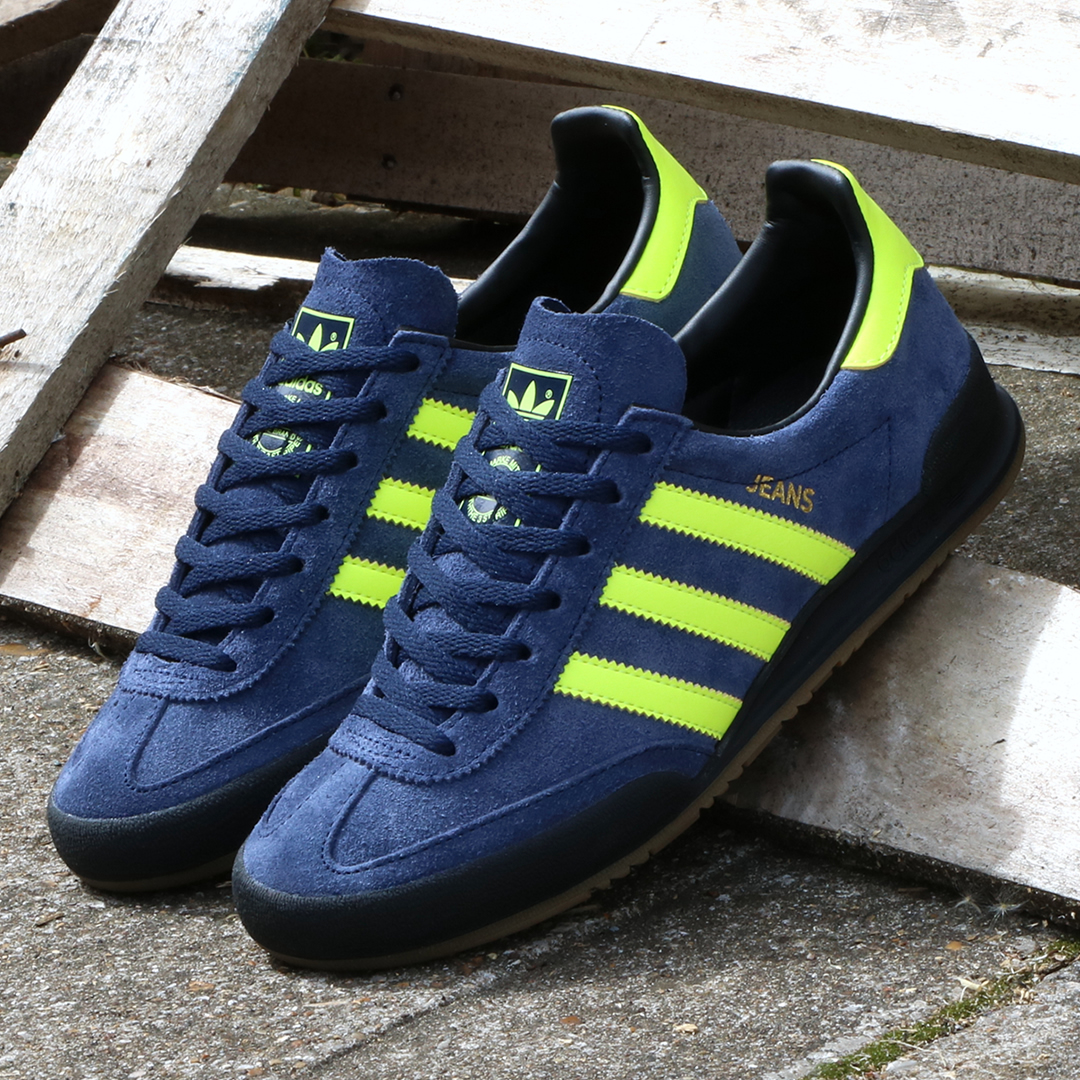 Up until recently the Jeans MKII had disappeared, with the only trainers available being the original ones that were released in the 80’s. It was only the MKI that had seen a resurgence from the archive after its last revival in 2003. After a highly anticipated wait from classic 3 stripes collectors, admirers and trainer hunters it was announced in 2015 that the MKII would be making its re-release. The adidas Jeans MKII trainer was re-released from the archives in 2015 closely followed by a GORE-TEX version in 2016.

For 2017 the classic adidas style is given the bright neon treatment with some never seen before colourway options. The new adidas jeans mk2 trainers navy/solar yellow as well as adidas jeans mk2 energy blue with contrasting pink stripes and heel tab. Both versions come as some of the boldest colours ever to have been seen on the Jeans trainer making them some of the most sought after versions released to date. The trainers are finished off with soft suede uppers and gold metallic branding to the sides as well as the signature heel stabiliser in black.

The adidas Jeans MKII Trainer is available now from 80scasualclassics.co.uk. 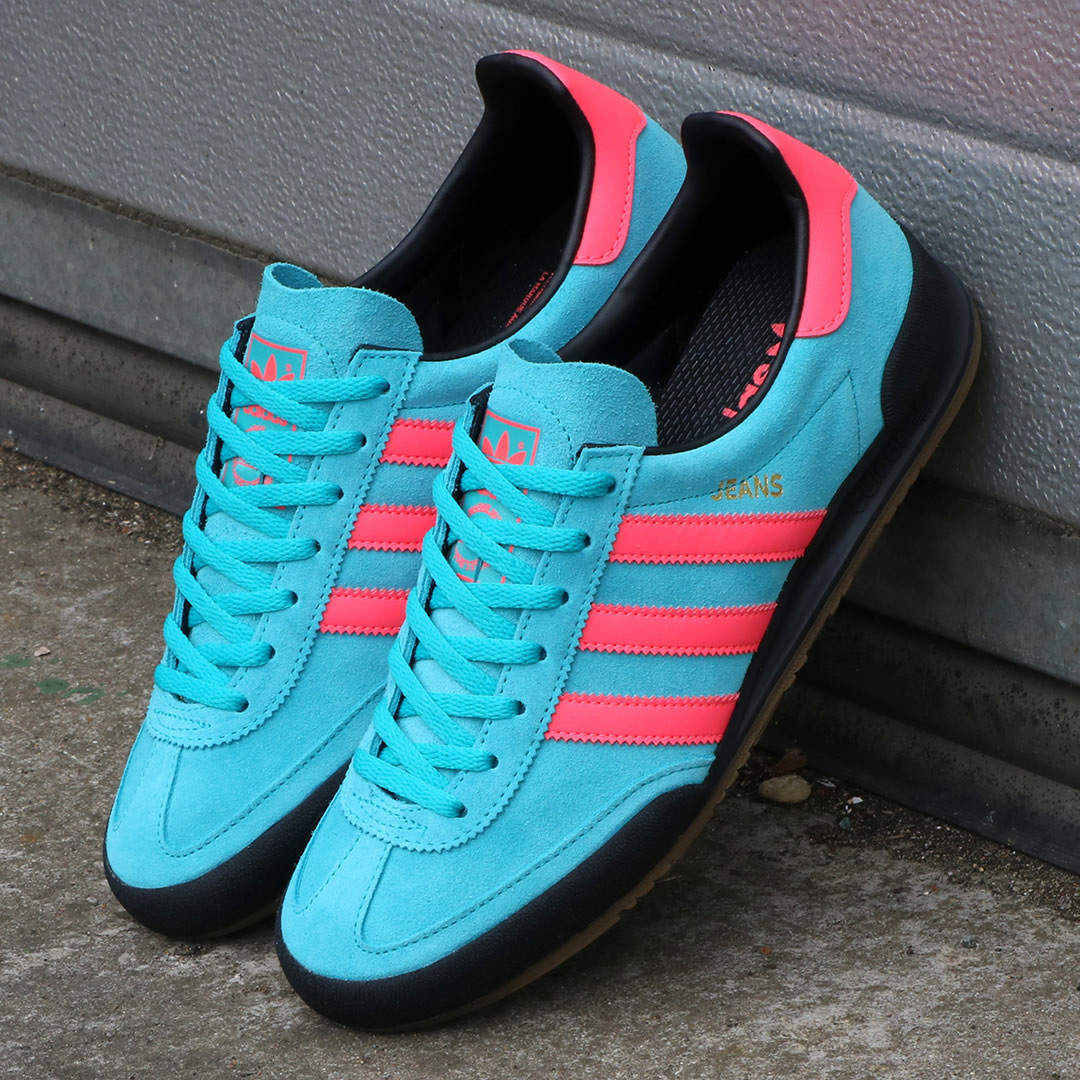