X
This site uses cookies to provide and improve your shopping experience. If you want to benefit from this improved service, please opt-in.
More Info
Accept Cookies
80's Casual Classics80's CC NostalgiaEverything You Need To Know About The PUMA Fast Rider
Menu 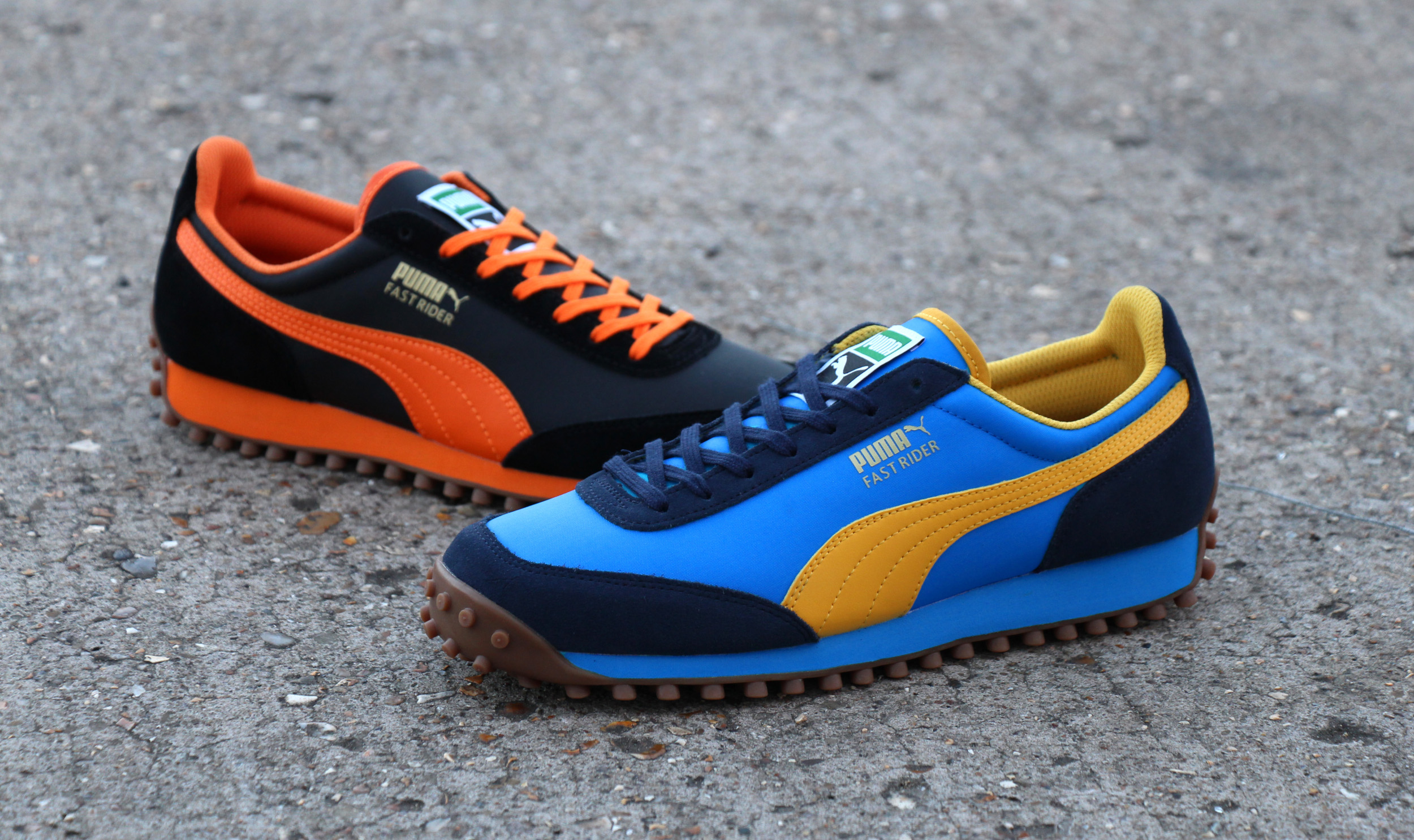 Everything You Need To Know About The PUMA Fast Rider

The history of the PUMA Fast Rider trainer goes back to the early 80s and a new era of trainer traction from the German sportswear brand.

Decades before the running boom of the 70s & 80s, PUMA’s running trainer heritage had already firmly stuck its spikes into the running world. German athlete, Armin Harry, wore a pair of PUMA running shoes as he crossed the line for the 100 meter sprint at the Rome Olympics in 1960. Funnily enough he then switched to wearing a pair of adidas trainers for the awards ceremony. A sign of the bitter rivalry between the two legendary Dassler brothers at the time and who could get the top athletes to endorse their products. PUMA was then showcased to a global stage at the Mexico City Olympics in 1968 as Tommie Smith and John Carlo gave the famous Black Power salute at the winners podium for the 200 meter sprint. Following on the running DNA of styles like the Easy Rider from 1978, the PUMA Fast Rider was all about speed, traction and of course…running. 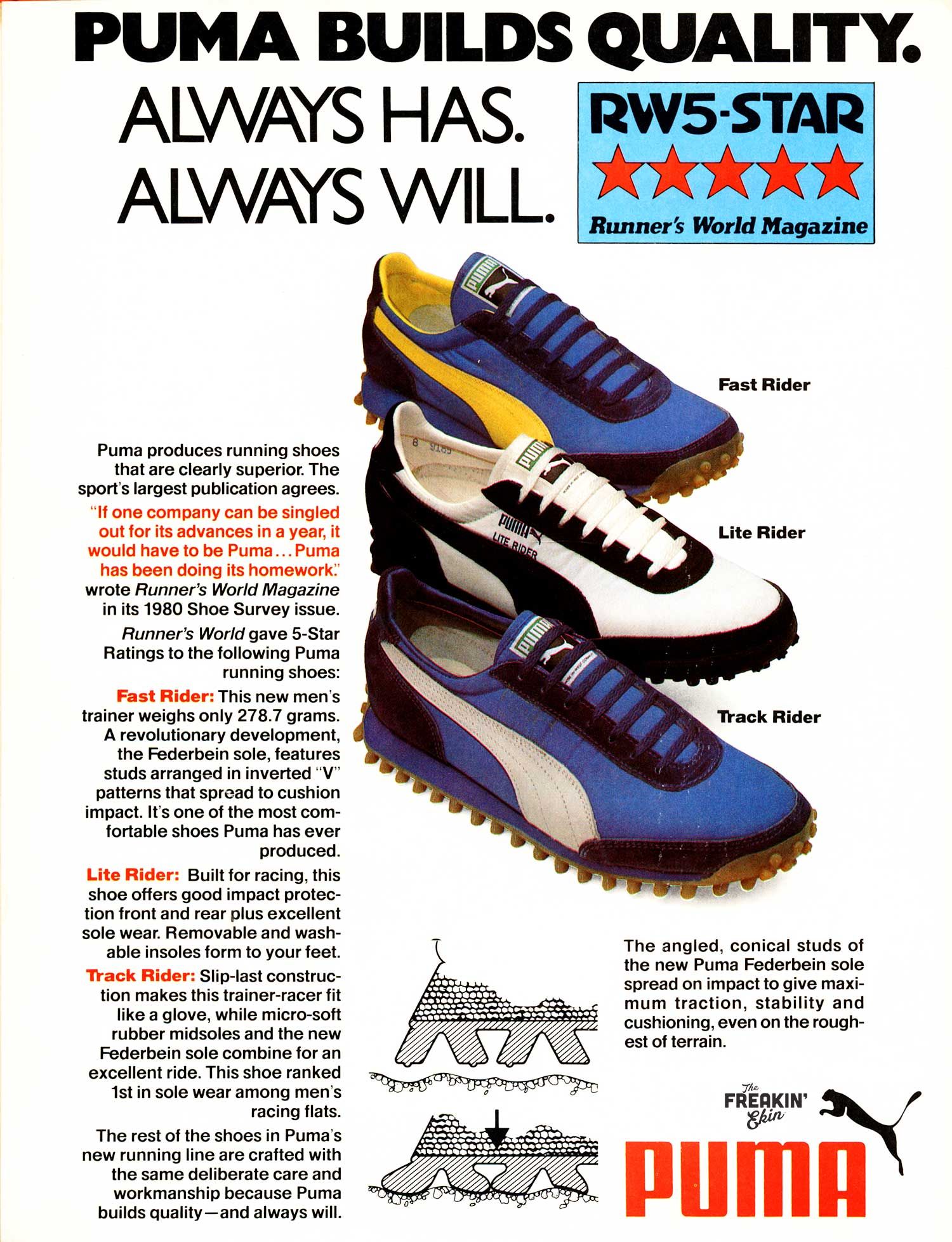 Above: An original advert for the PUMA Fast Rider, Lite Rider & Track Rider from 1980.

Originally released in 1980, the Fast Rider weighed in at mere 279 grams and featured the latest running trainer technology at the time such as a Federbein sole with the studs arranged in an inverted ‘V’ pattern for extra cushioning. With 5 star reviews from some of the worlds biggest running publications at the time such as Runners World, the running elite were clearly paying attention to PUMA’s new direction. The Rider ranges from PUMA were also great for all terrain thanks to the additional Federbein studded outsole which added traction to a trainer like nothing PUMA had previously done before. Great for the tracks the roads and the trails, the PUMA Fast Rider trainer also ticked all the different running terrain boxes. In a recent interview with Highsnobiety when talking about the PUMA Fast Rider history, PUMA archivist Helmut Fischer aka Mr PUMA said; “The Fast Rider started a new era, this was the first jogging shoe in Germany, and it was one of the first times when designers actually considered the needs of someone who runs on pavement. The [Federbein] technology on the sole was important, this provided a lot of shock absorption and comfort.” 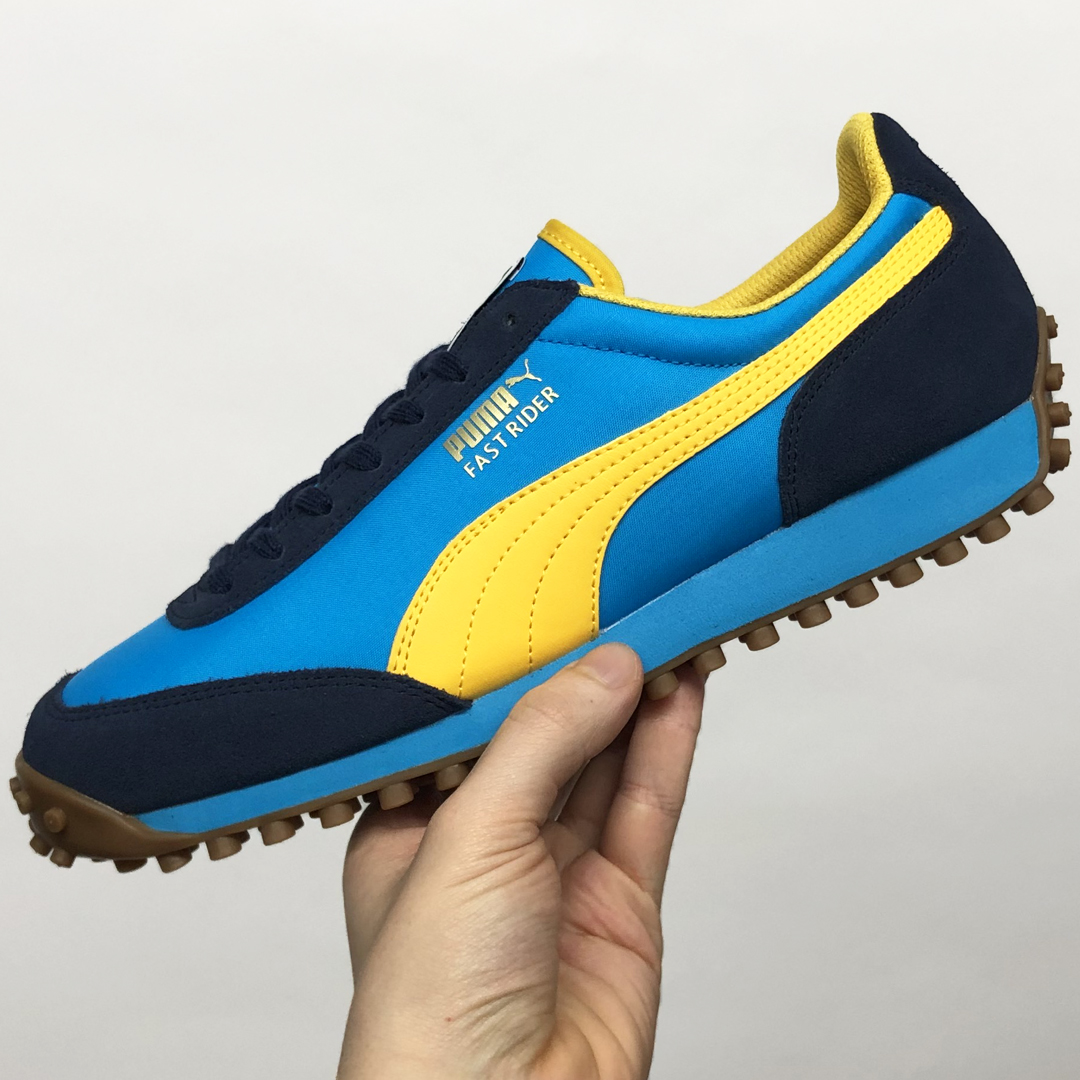 Above: The PUMA Fast Rider in blue/yellow now available from 80s Casual Classics.

The PUMA Fast Rider is now revived in its original blue and yellow colour blocking retro style from the early 80s. Now also introduced to 80s Casual Classics in an updated black/orange colourway, the OG silhouette features the original running style of the 1980 model. Highlights include a combination of suede and mesh to the uppers with the iconic Federbein outsole design for traction, stability and grip. Other features include the famous track branding in leather alongside gold foiling to the side walls. The Puma Fast Rider is a great OG footwear addition to any retro trainer fans’ wardrobe. 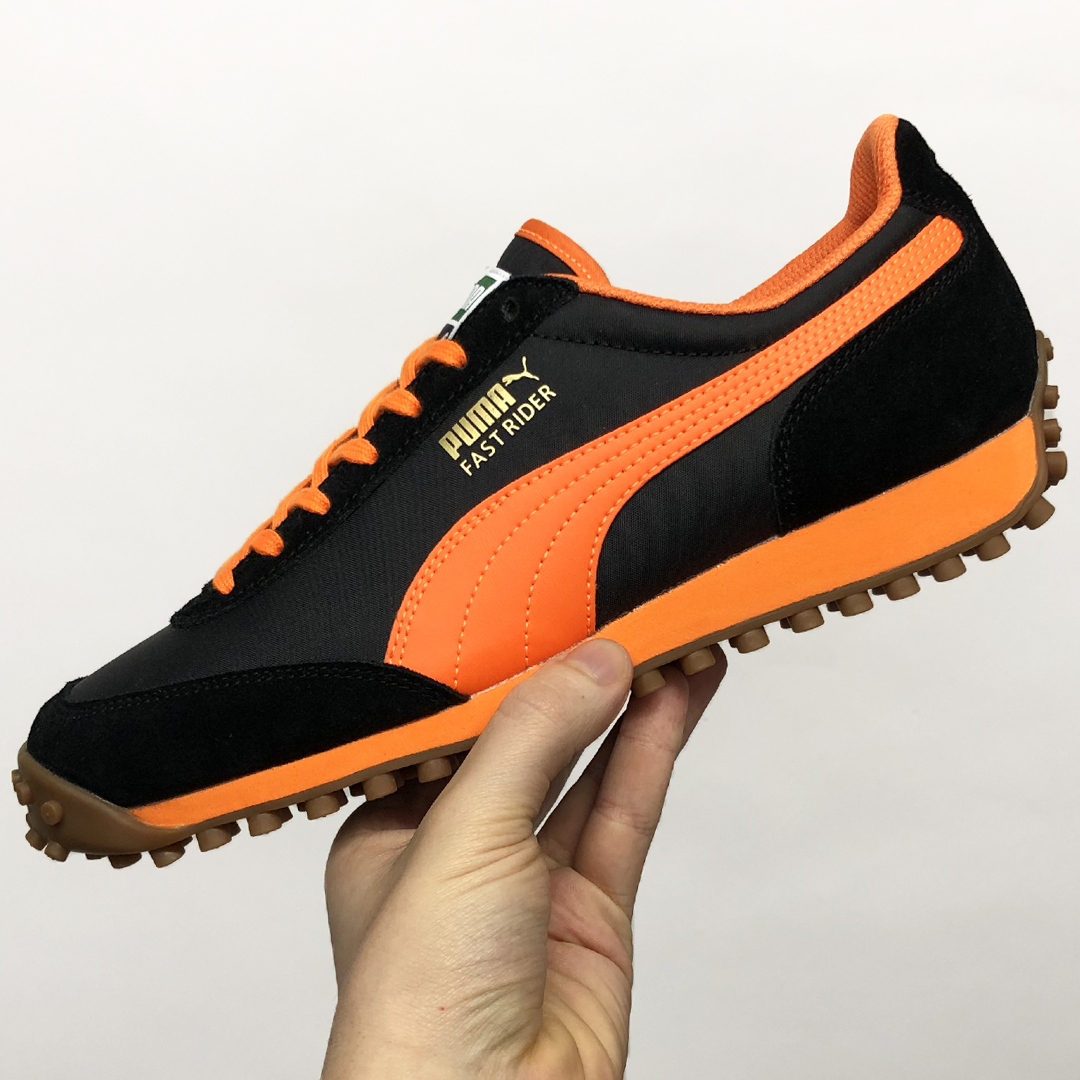 Above: The PUMA Fast Rider in black/orange now available from 80s Casual Classics.