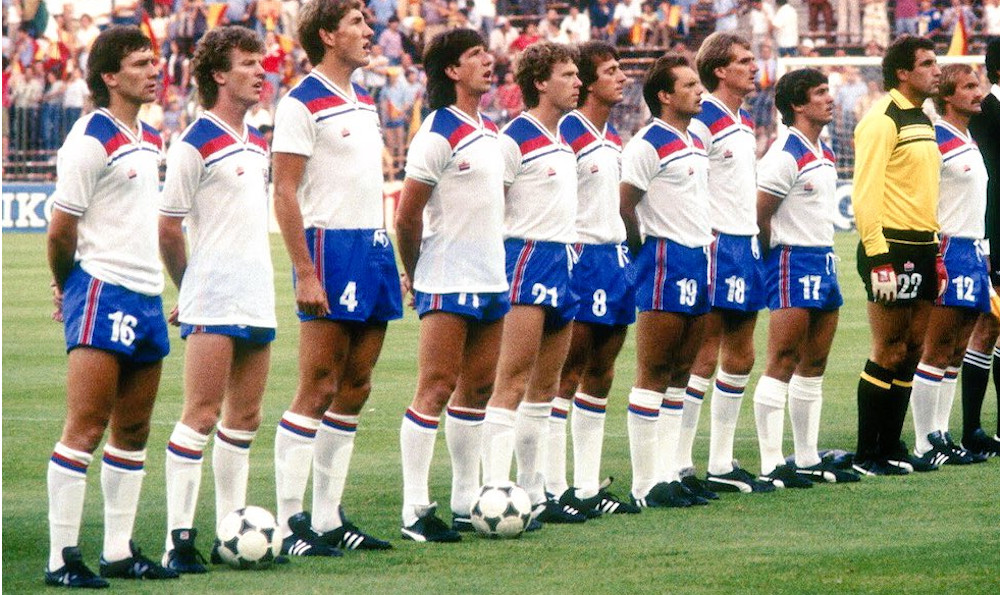 How Admiral Revolutionised The Football Shirt

A new ITV documentary explores the story of Admiral and re-visits classic 3 Lions Admiral styles like the 1982 England shirt.

The replica football kit market is now a multi billion £ industry. Go to a football game nowadays and you’ll likely see home & away shirts from the 70s, 80s & 90s associated with golden eras & legendary players. Supporters of all ages are now kitted out in retro football shirts all over the country from the Premiership to Non League clubs. But supporters wearing football shirts wasn’t always a thing. Before the 1970s football shirts were boring and simply represented the colours a club was associated with. Fans simply didn’t wear football shirts, not that they were available to buy anyway. All this would soon change in a factory in Leicester, what was once the heart beat of the British sportswear manufacturing industry. A new documentary from ITV explores the original pioneers of replica football shirts and kit sponsorship’s. Admiral were the very first sportswear brand in the UK to put their logo on kits, and not only that, but dramatically change how football kits would look. Admiral’s ingenuity changed the face of the football shirt forever breaking decade old traditions with new cool & colourful designs. The 1982 England shirt was arguably their finest hour but we will touch on more of that later on. 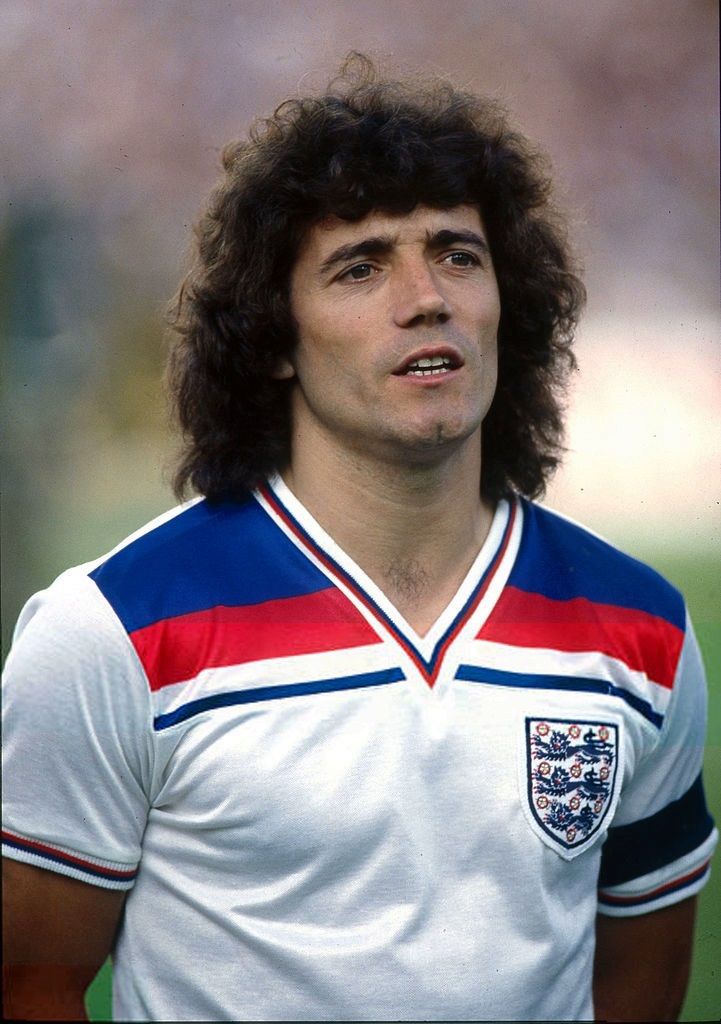 Before they saw a gap in the market for the replica football shirt, Admiral were making underwear, a slight bit of difference from kitting out the World Cup England squad in 1982. Admiral’s first kit sponsorship came with the West Yorkshire club, Leeds United. After a sales pitch had gone horribly wrong, Don Revie and his Leeds United squad just so happened to be training on the pitch nearby. Don liked what the Admiral guys were doing and agreed they could design the Leeds away kit & a tracksuit. It was this kit that really put Admiral on the map. Admiral would next design the the home kit for Leeds as well as signing kit sponsorship deals with the likes of Man Utd, West Ham & Coventry. The designs were like nothing you had seen before. V-necks, big collars, stripes, logo taping & yokes were things that had never been used on football shirts before. A new element of sportswear swagger had now entered the football stadiums with replica kits now also available for children on the terraces. Admiral were on a complete high. 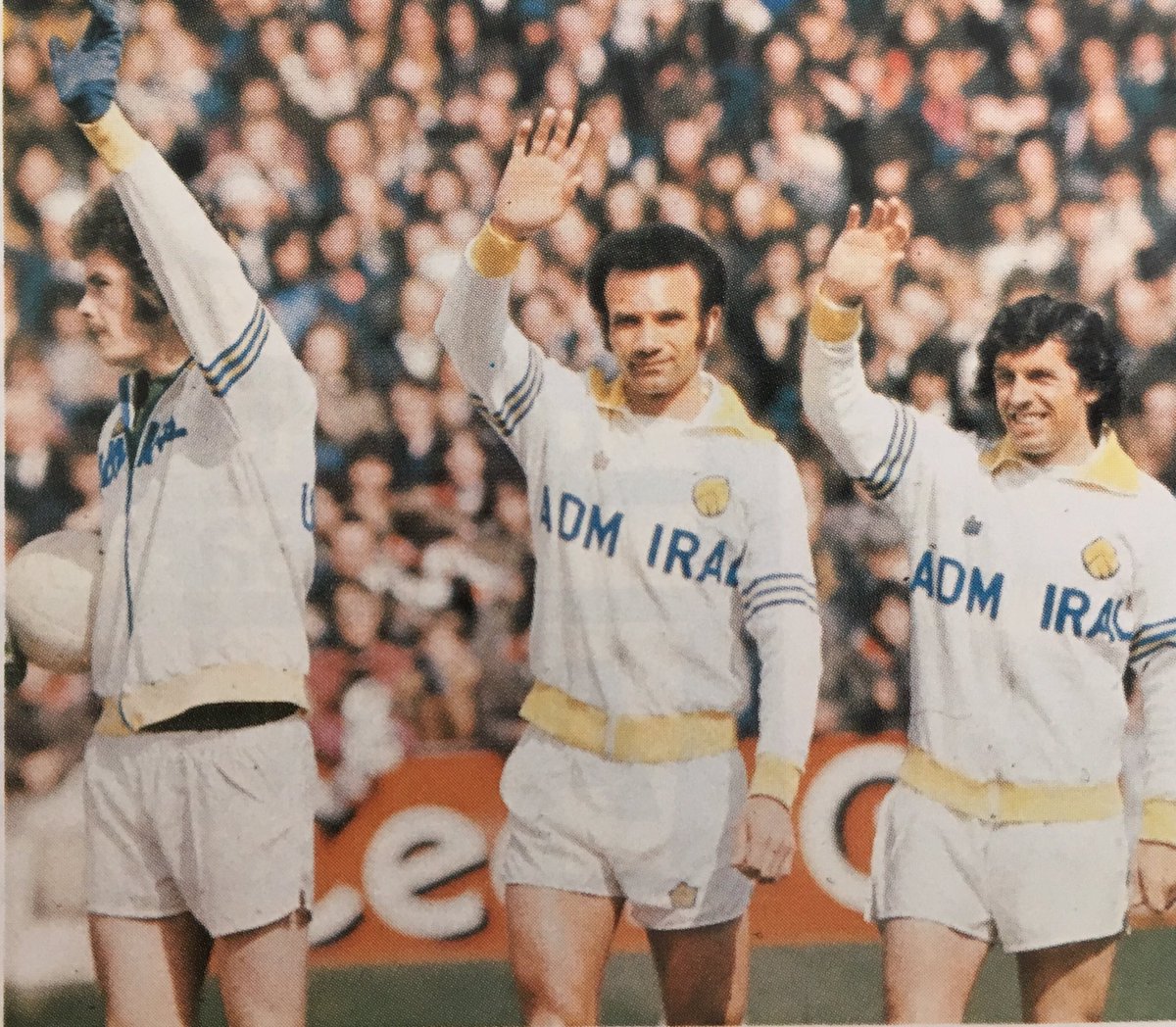 Above: The Leeds United Admiral track top from the 1974-75 season.

The 1976 FA Cup Final caused some advertising legalities with the BBC as both Man United & Southampton were sporting Admiral kits at the time. Admiral came up with a clever plan of switching the logos to the back of the track tops so they weren’t in full view as the teams came out onto the pitch of the famous twin towers of Wembley. This televised game was the start of branded sportswear as we know it today and marked the next chapter for football shirts and TV advertising. 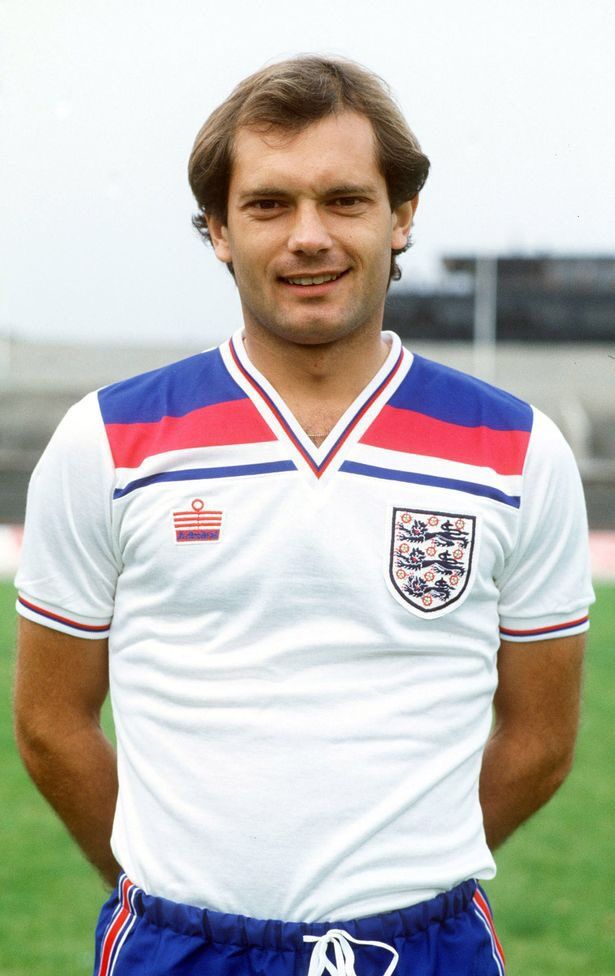 Admiral’s connection with Leeds United & Don Revie also saw them kitting out the England team which came to a climax in 1982 for the Spanish World Cup. England hadn’t qualified for the last two world cups and 1982 was a life line for Admiral to turn their business around. As new sportswear brands muscled in on the replica football shirt market like adidas, Umbro, Patrick & Le Coq Sportif, Admiral were finding it increasingly difficult to compete with lower manufacturing costs from overseas. The late 70s saw Maggie Thatcher’s austerity cripple Britain’s manufacturing and factories all across the Midlands which were once booming were now shutting their doors. The 1982 World Cup was make or break for the British brand. 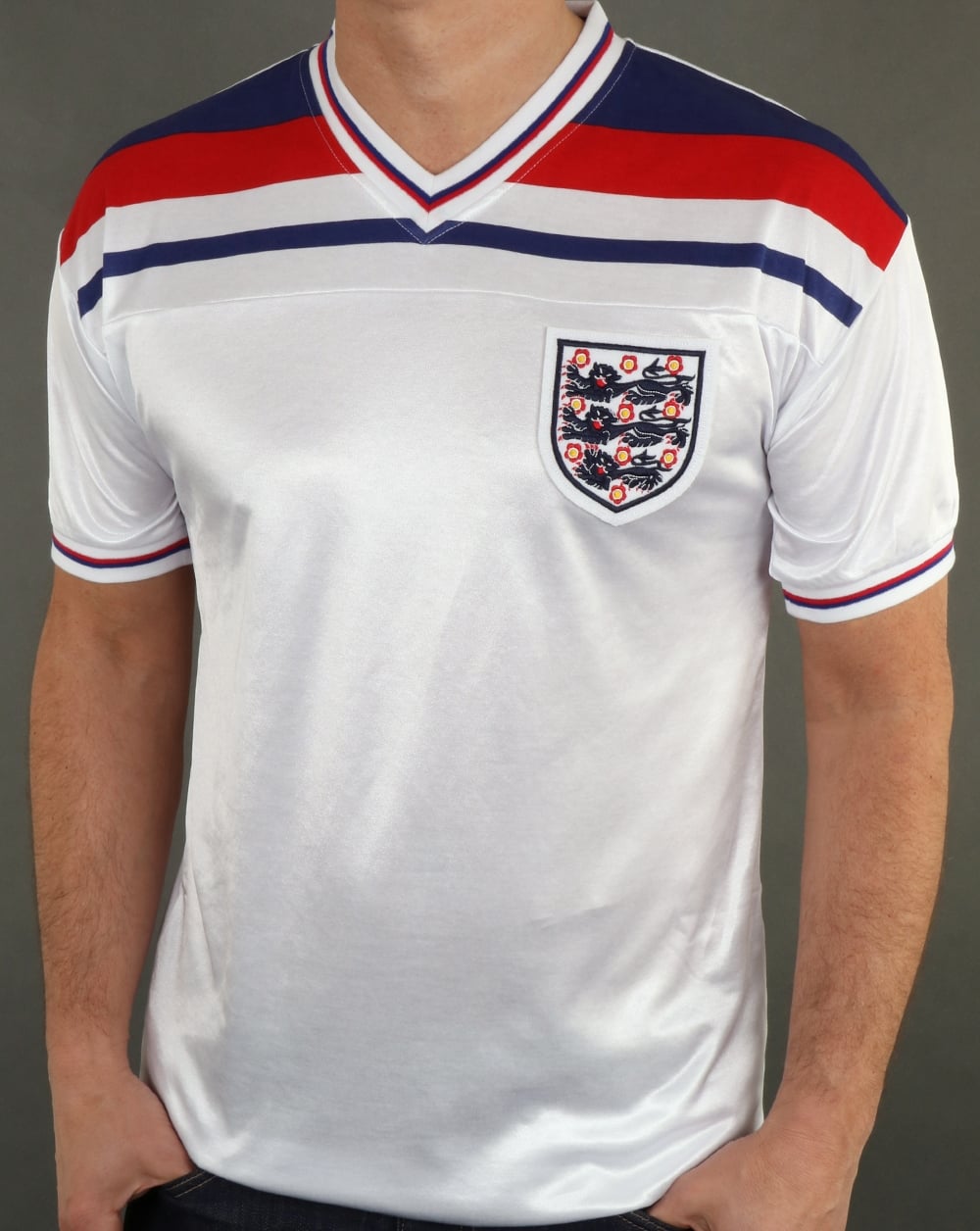 The 1982 England World Cup team included the likes of Kevin Keegan, Ray Wilkins, Phil Thompson, Peter Shilton, Glen Hoddle, Tony Woodcock & Bryan Robson. Although England didnt make it past the group stages, it was the shirt that really left a lasting legacy. Ask any serious retro football shirt collector to name some of their best England kits and the 82′ home & away shirts will always get a mention. The 82 shirt was the very first shirt that was available to adults & is considered the holy grail when it comes to retro England football shirts. 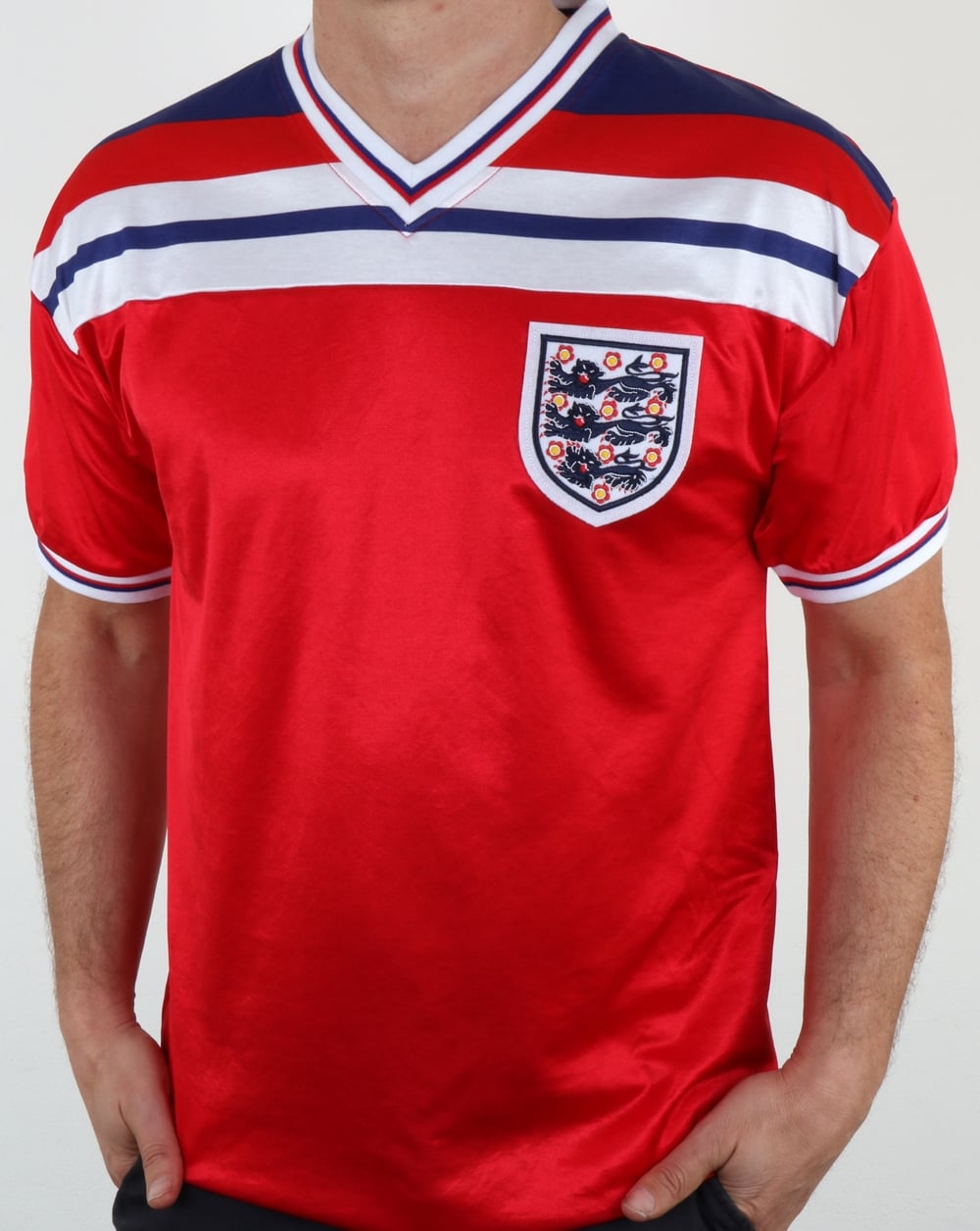 Above: The 1982 England Away Football Shirt now available from 80s Casual Classics.

Founder of 80s Casual Classics, Neil Primett, recalls the era very well. “People were moving away from black and white to colour TV’s. Admiral moved to a more fashioned idea of kits rather than previously just distinguishing one team from another. Then suddenly it’s not school sports clothes it’s replica kits. My mate told me even his village team played in the England 1980 kit at the time.”

With the latest adidas sponsorship deal with Real Madrid valued at £1 Billion, it’s fair to say the financial side of the game has changed a lot since the days of Admiral. The Admiral era was like nothing before it and paved the way for the modern day football shirt as we know it today. As new sponsorship deals come and go with more money getting thrown around than ever before it’s still the old retro shirts that we all want to wear. Whatever your connection is to a football shirt there will always be something magical about the original styles from the past. Get Shirty is now available to watch via the ITV Hub.