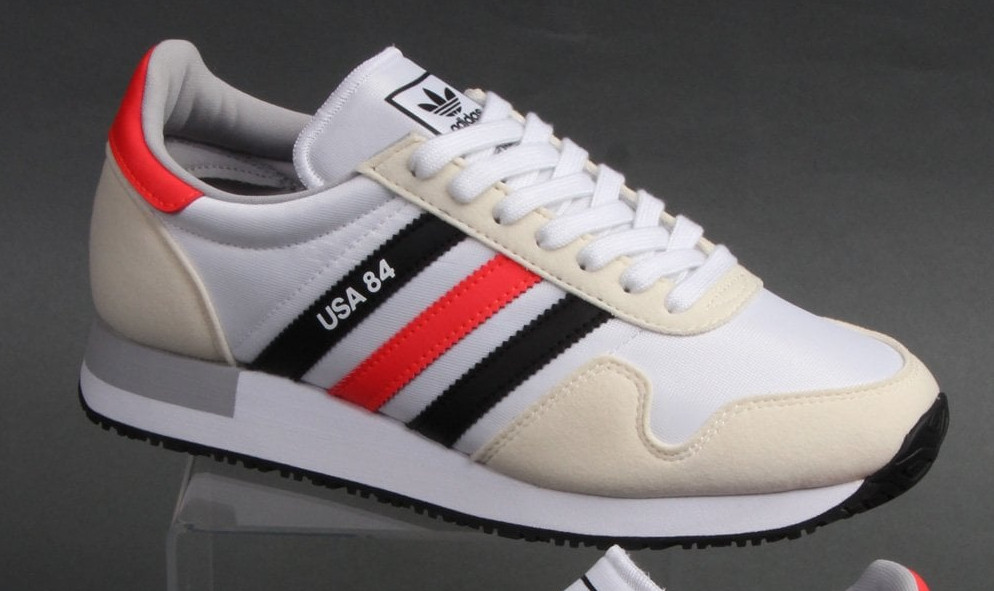 The adidas USA 84 trainer harks back to a golden era of 3 stripes, running trainers & elite athletes from the 1980s.

It’s always pretty exciting when adidas delve deep into the 3 stripes archives & look back at the golden eras of 3 stripes from the last 40 years. The adidas HQ in Herzogenaurach, Germany has become like the Aladdin’s cave for adidas designers who are constantly reviving past designs’ for the modern day trainer enthusiasts. Without the archives, adidas would simply not be “Die Marke Mit Den 3 Streifen” as we know it. For one of their latest footwear releases adidas looks back to the golden era of running trainers from the 1980s for a brand new silhouette with the adidas USA 84 trainer. 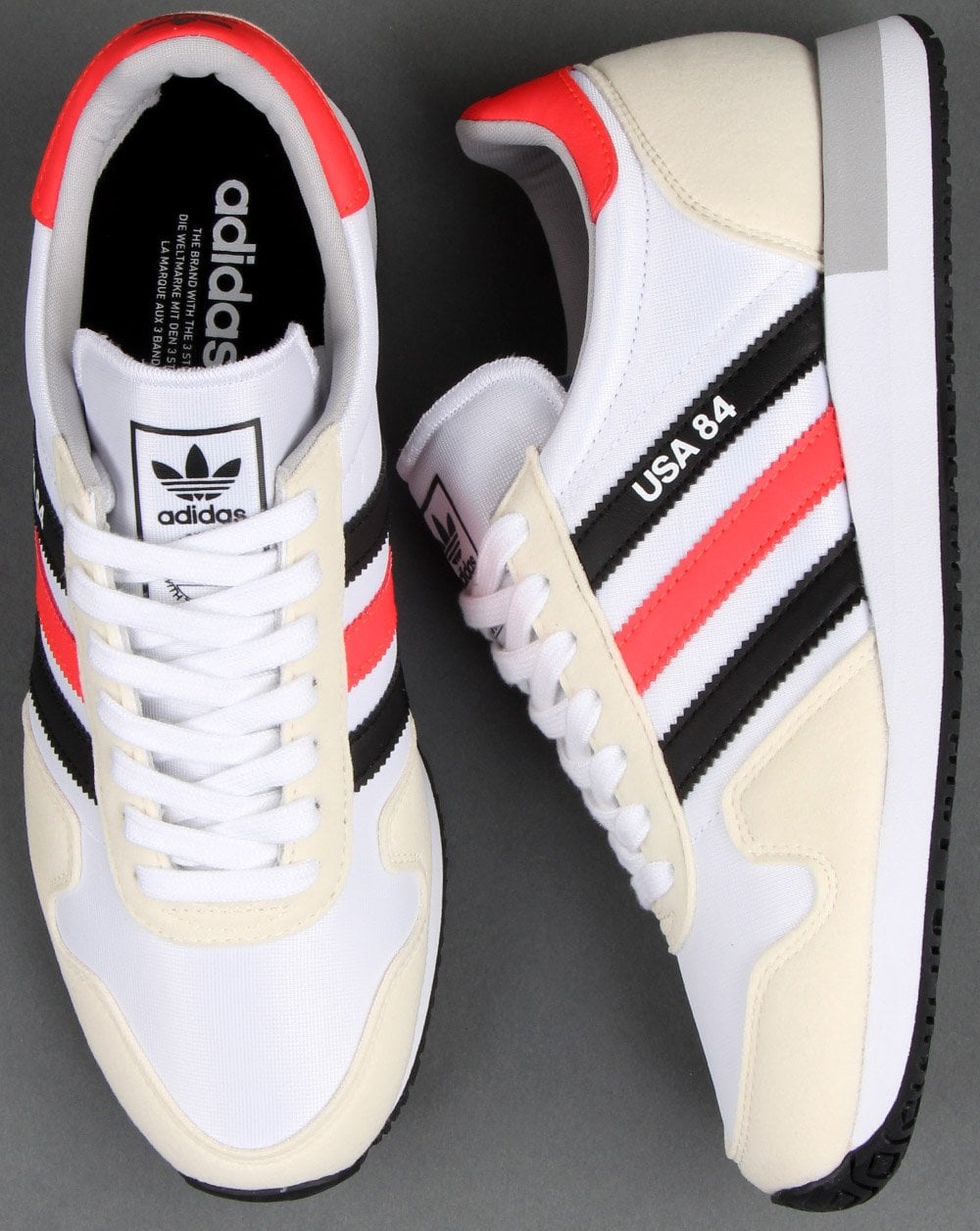 Above: The adidas USA 84 trainer in white/black/red now available from 80s Casual Classics.

As far as running trainers go for the German sportswear brand it was the 80s where they really stamped their 3 stripes on the tracks & the tarmac. The 80s as a decade in itself saw some of the greatest ever footwear releases to date & as far as adidas were concerned they weren’t holding anything back. The running boom of the early 80s saw the start of what we have aptly dubbed at 80s Casual Classics as the “trainer race”. Instead of rockets and multi-million dollar space programmes it was sole technology, stability & who could create the lightest running shoe. During this golden era adidas released the likes of the Oregon, the Marathon & the New York which utilised a special webbing system to the midsole & were made in collaboration with the Olympic running coach, Bill Dellinger. Other notable running styles from the era also included the Boston Super, the ZX series and the Los Angeles trainer which originally launched to celebrate the Los Angeles Olympics in 1984. 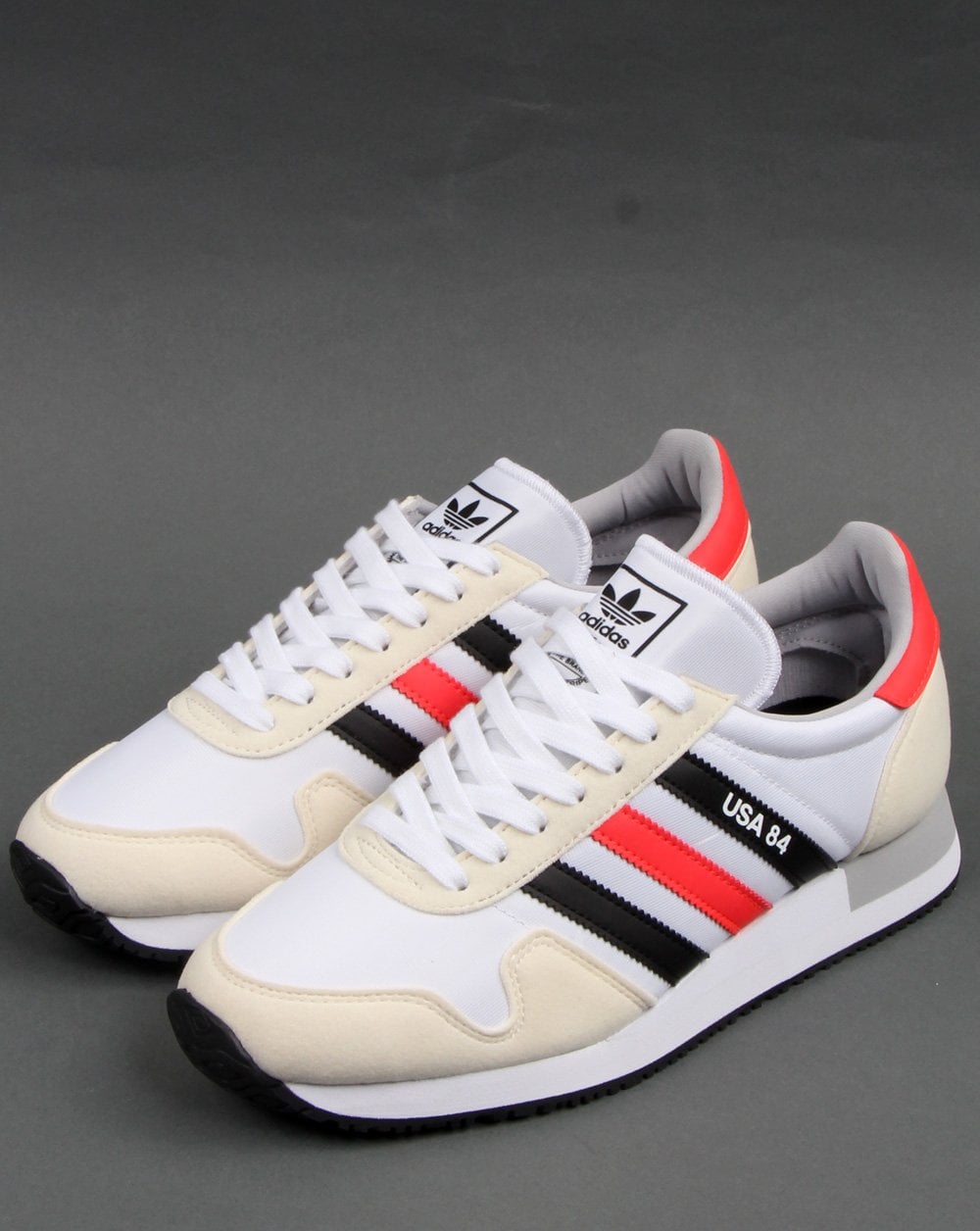 Above: The adidas USA 84 trainer in white/black/red now available from 80s Casual Classics.

Just like the recently released adidas Stadt trainer that captured all the magic of the colourful City Series, the adidas USA 84 trainer runs with a similar type of vibe. Capturing all the running nostalgia of the 1980s, the adidas USA 84 references the likes of the Los Angeles the Oregon & the New York for a previously unreleased release. Drawing inspiration from the golden era of 3 stripes running trainers, the USA 84 features a lightweight, two layer mesh upper that could easily be mistaken for an OG 3 stripes runner. Other features includes an EVA midsole for that extra cushioning underfoot & an archive inspired design which is sure to get adidas collectors scratching their heads. The adidas USA 84 trainer is finished off with the signature 3 stripes to the sidewalls as well as original trefoil branding to the tongue and heel tab.