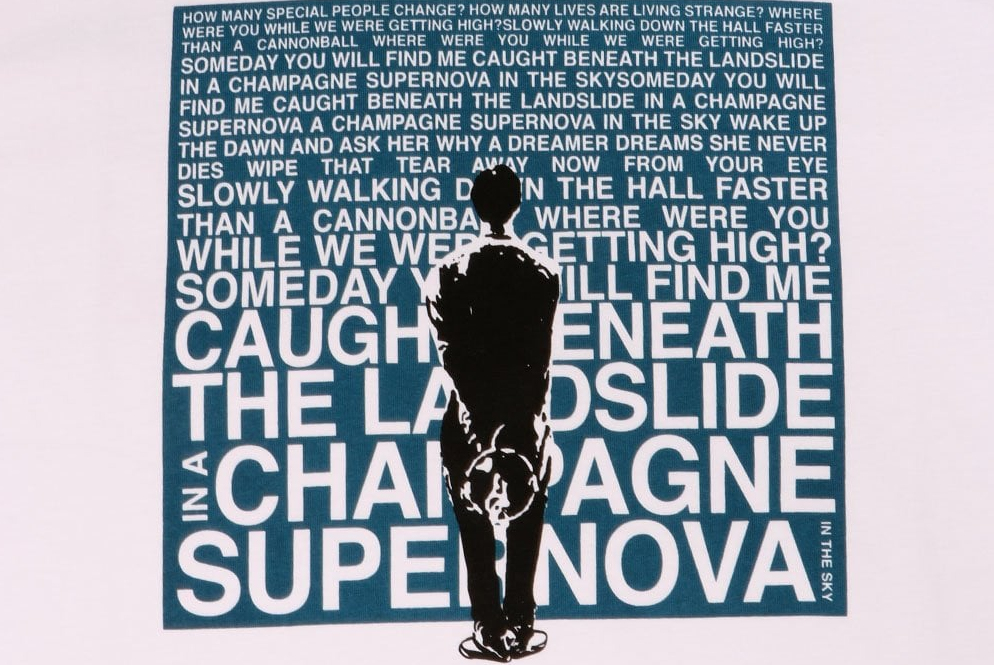 How many special people change? How many lives are livin’ strange? Where were you while we were getting high? Slowly walkin’ down the hall. Faster than a cannonball. Where were you while we were getting high? Do the lyrics sound familiar? Of course they do, because they’re the opening lyrics from the classic Oasis tune ‘Champagne Supernova’. Cue the 60s inspired phycedlic graphics, Liam Gallagher laid on a bed and what is arguably one of the best Oasis songs of all time from the golden era of Oasis & the Gallagher brothers. Like the majority of bands the best stuff usually comes out in the early years & Champagne Supernova was no different. Giving a nod the classic Britpop tune from 1996, the Weekend Offender Supernova T-Shirt celebrates one of the Manchester born bands’ most iconic songs. 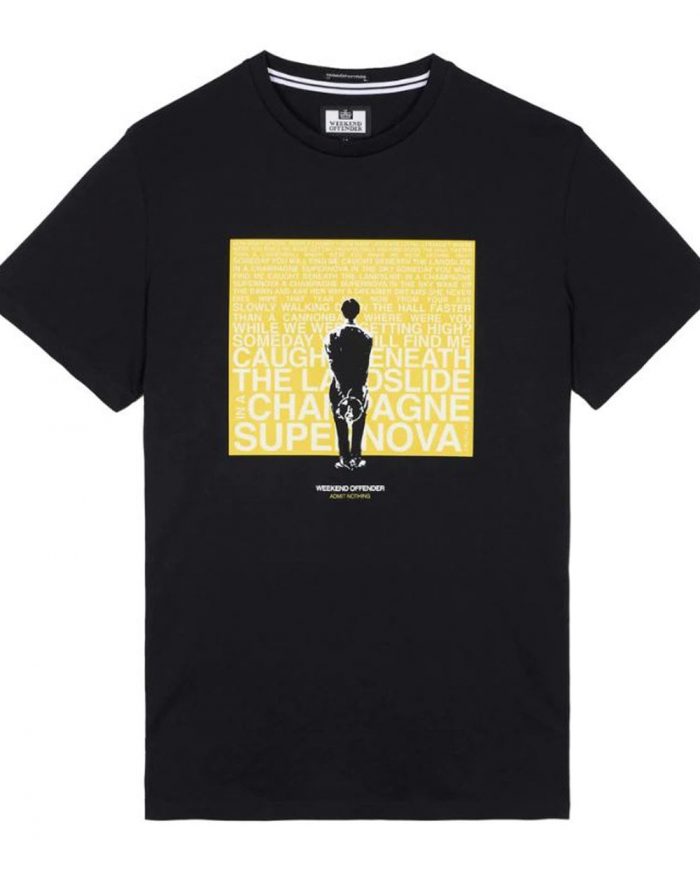 Champagne Supernova featured as the very last track on the album ‘What’s The Story Morning Glory’, the second studio album from Oasis which was originally released in 1995. Featuring alongside other notable classics such as ‘Wonderwall’, ‘Roll With It’, ‘Don’t Look Back In Anger’, ‘Some Might Say’ & ‘Morning Glory’, ‘Champagne Supernova’ took a more a phycedlic approach, something which is pretty clear in the video. The die hard Oasis fans out there will probably already know what a champagne supernova is, but for those who don’t it’s basically a martini glass full of champagne with cocaine around the rim. The Gallagher brothers were never scared of showing their love for the white stuff, good or bad, the song dips into their inspirations from psychedelic rock from the late 60s which crossed over with casual fashion & lad culture in the mid 90s. 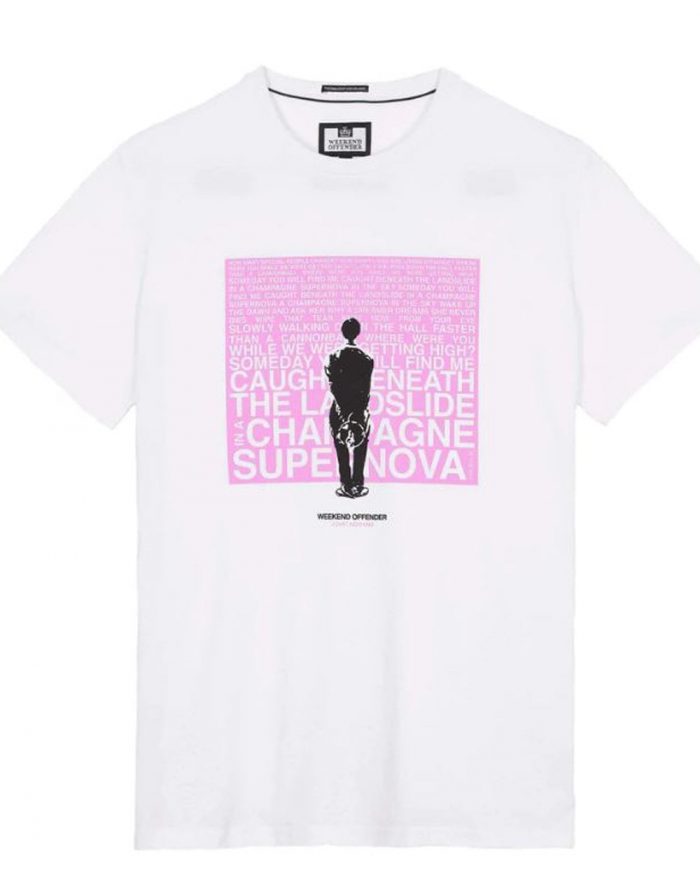 Even though it was never officially released on the UK charts, ‘Champagne Supernova’ is highly regarded as one of the greatest Oasis songs of all time. When speaking to the NME in 2005 about the meaning of the song Noel Gallagher recalled; “It means different things when I’m in different moods. When I’m in a bad mood, being caught beneath a landslide is like being suffocated. The song is a bit of an epic.” 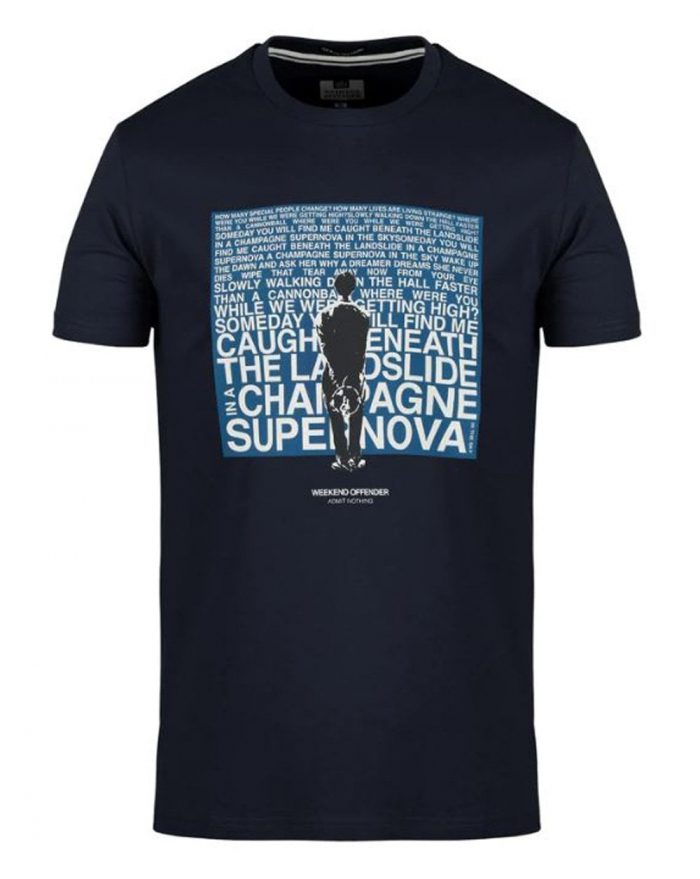 As previously seen on a range of musical royalty from Mike Skinner of The Streets to Liam Gallagher himself, Weekend Offender’s musical connection have become the backbone of the Cardiff born “Casual” brand. Founded back in 2004 by Sam Jones and Rhydian Powell, the popular UK terrace brand boasts a no fuss approach to their collections with a ‘does what is says on the tin’ mentality. Drawing inspiration  from the casual subculture of the UK, Acid House, Britpop, pop culture and all things in between this latest t-shirt release gives a nod to the classic Oasis song from 1995. Featuring lyrics of the song alongside a silhouette of Liam with his iconic tambourine, the graphic t-shirt is a must have for fans of the legendary Oasis song. Available in a trio of colourways, the Weekend Offender Supernova t-shirt is a great addition to your summer holiday wardrobe. Shop the latest Weekend Offender releases now from 80s Casual Classics via the the links.