Something Weekend Offender have always done a very good job of is their graphic tees. With casual and subculture inspired graphics with everything from collectable adidas trainers to Breaking Bad characters over the years, the Cardiff born early noughties brand has kept its fans guessing from season to season. Founded by Sam Jones and Rhydian Powell back in 2004 the brand quickly established itself with lad culture from the terraces to casual collectors and music fans. For our latest selection from the British casual brand we’ve introduced styles like the Weekend Offender Stone Roses t-shirt alongside numerous other music inspired graphics from the original Madchester scene, Balearic beach vibes and 90s Britpop.

Above: Forever adored. The Stone Roses with Ian Brown wearing his famous money t-shirt as featured in the latest collection from Weekend Offender. 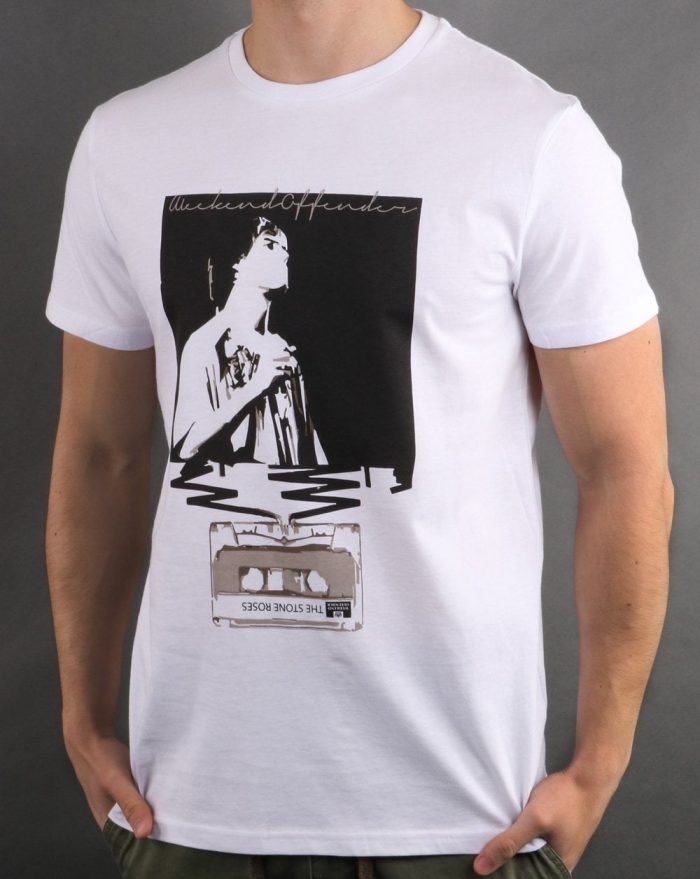 First up we’ve got the Weekender Offender Stone Roses t-shirt which celebrates the legendary Madchester band which formed back in 1983. A great addition to any casual collector or Stone Roses fans’ wardrobe, the t-shirt features Ian Brown wearing the iconic white money t-shirt which he famously wore during the video for ‘I Wanna Be Adored’. The track was the very first song from the self titled album from 1989 and his highly regarded as one of the greatest Stone Roses tracks of all time. Titled ‘King Monkey’, the t-shirt gives a nod to Brown’s almost ape like appearance. 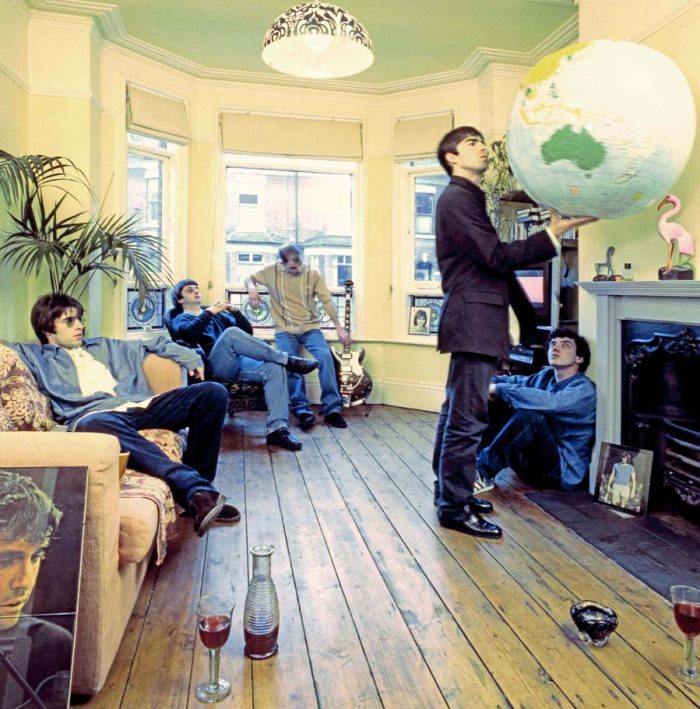 Above: The artwork and cover for ‘Definitely Maybe’ was actually photographed in the living room of Boneheads’ house in West Didsbury, Manchester. 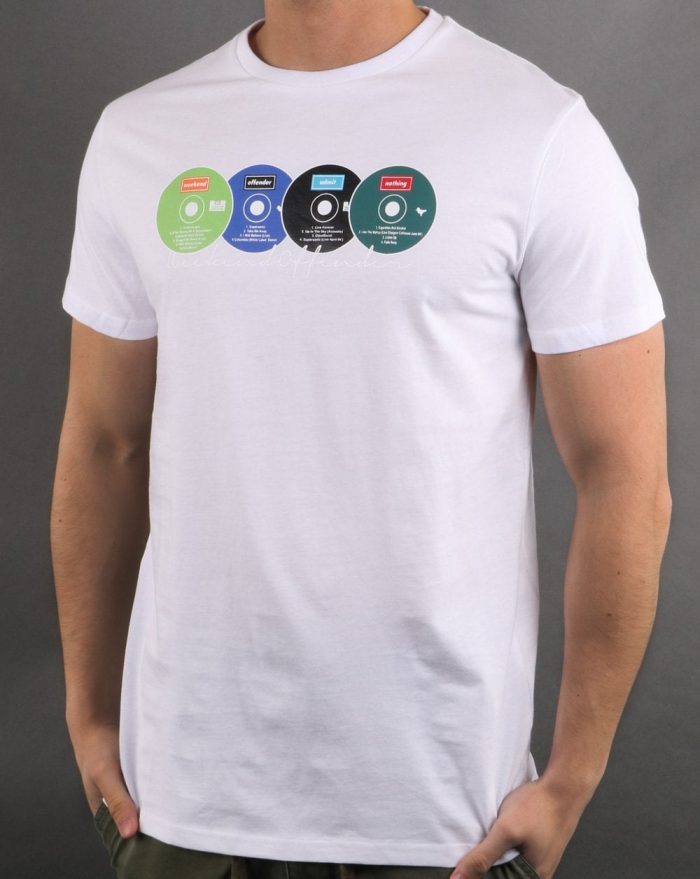 Next up we’ve got the Weekend Offender ‘Definitely Maybe’ t-shirt which features 4 cd’s in reference to the debut studio album from the Manchester born band, Oasis. Released in 1994, the album featured classic Oasis tracks such as ‘Supersonic’, ‘Cigarettes and Alcohol’, ‘Slide Away, ‘Rock ‘n’ Roll Star’ and ‘Live Forever’. Definitely Maybe is considered the best Oasis album by many fans and was also voted ‘The Greatest Album Of All Time’ by a readers poll in the NME in 2006. 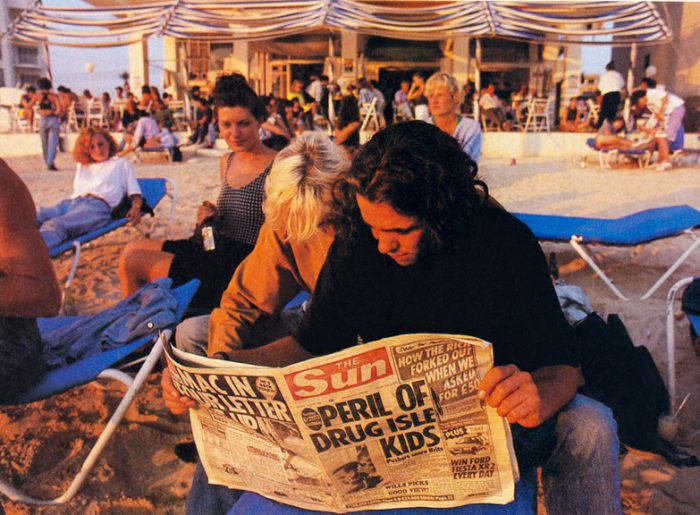 Above: “Peril Of Drug Isle Kids”. Rave revellers outside the legendary Cafe Del Mar bar in Ibiza in 1989. 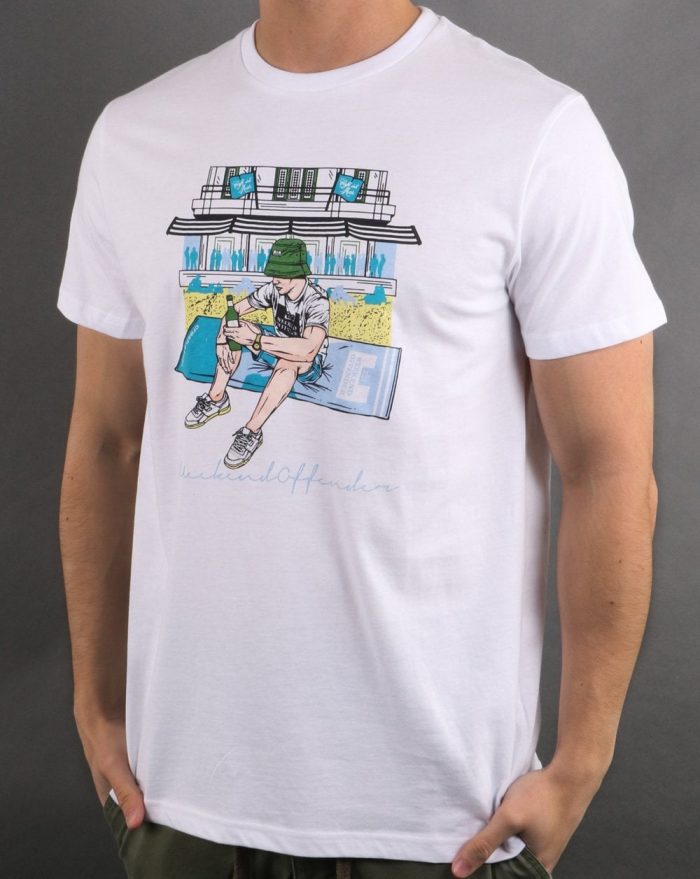 Finally we’ve got the Weekend Offender Cafe Del Mar which pays homage to the dance music mecca and the famous San Antonio bar. A key venue in the history of Ibiza’s dance music legacy, Cafe Del Mar played Balearic and ambient sounds at the end of the 1980s and would go on to become a record label in itself. The EDM hotspot also featured in the title of the all time Ibiza dance classic track ‘Cafe Del Mar’ from Energy 52 in 1993, a tune which is still considered one of the greatest 90s trance anthems of all time.