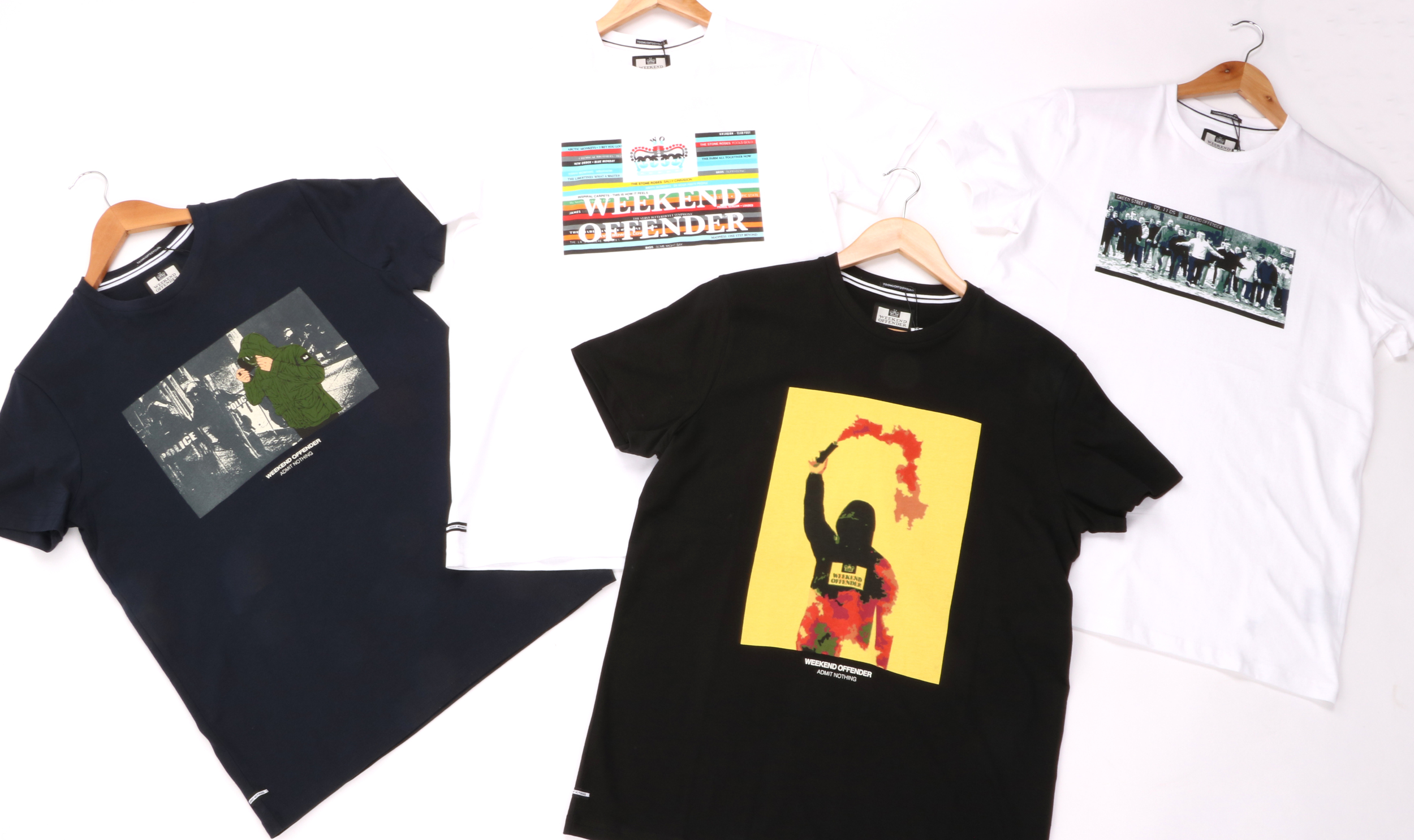 Founded back in 2004 by Sam Jones and Rhydian Powell, Weekend Offender has become one of the most popular UK terrace brands. With a no fuss approach to their collections and a ‘does what is says on the tin’ mentality, Weekend Offender takes inspiration from the casual subculture of the UK, the music associated with it and everything in between. In 2016 the UK government even launched an investigation into the Welsh brand for using it’s famous HM Prison Service crown logo, with the name ‘Weekend Offender’ giving a nod to lad culture associated with match days down the pub and on the terraces. With a loyal following, Weekend Offender are best known for their graphic tees and outerwear with new styles like the Weekend Offender Green Street t-shirt now arriving at 80s Casual Classics for the latest season. 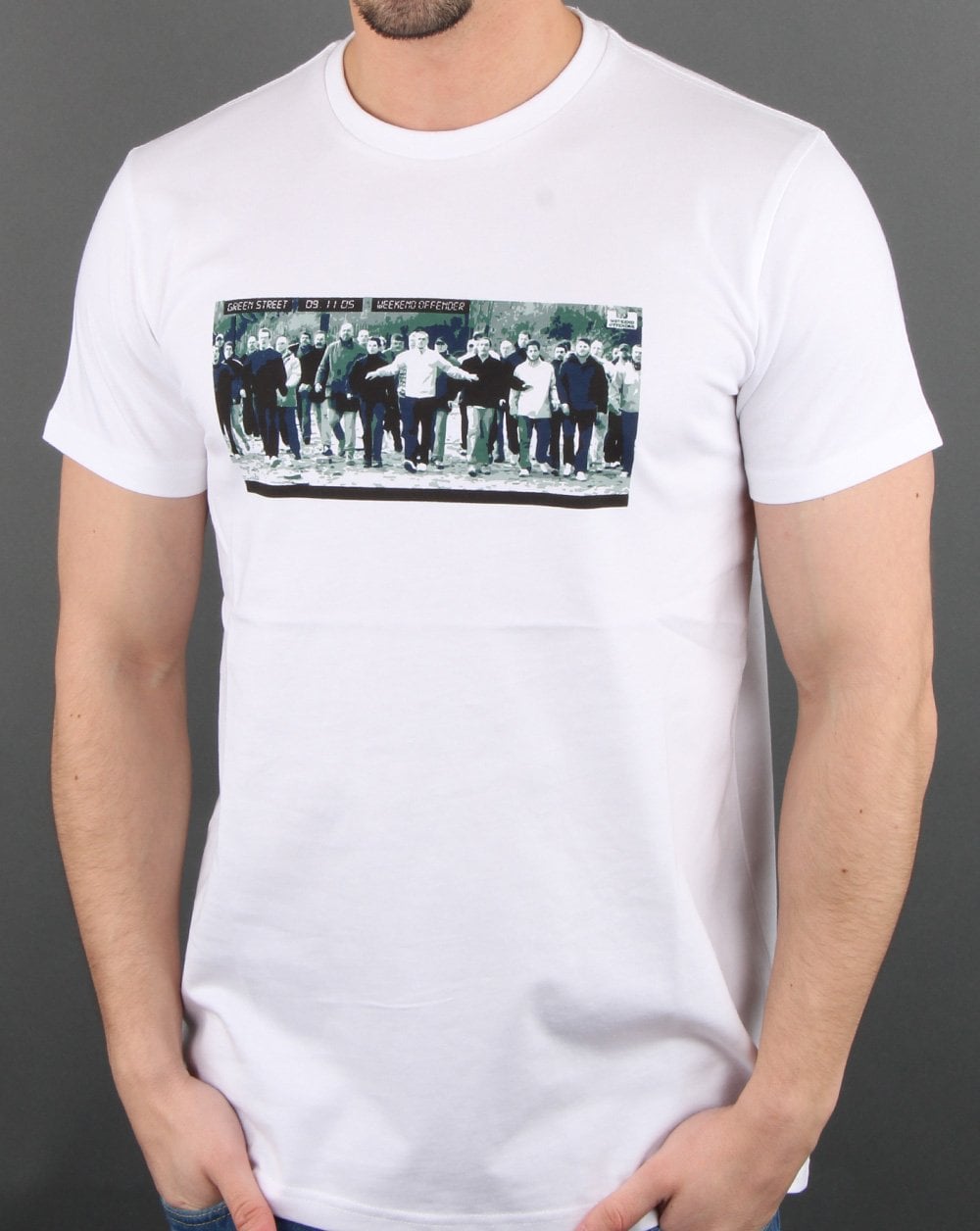 Alongside Nick Love’s The Football Factory from 2004, Green Street brought the hooligan subculture of the UK to the big screen like never before. The 2005 film saw a massive revival of casual designer brands as well as Elijah Wood ditching the shire for a bit of Stone Island. This latest t-shirt release from Weekend Offender sees the famous final fight scene where the GSE (Green Street Elite) and Millwall’s NTO firm meet near the Millennium Dome for the final showdown. The iconic scene ends with Tommy Hatcher (Geoff Bell) beating GSE’s top boy Pete Dunham (Charlie Hunnam) to death and the mass hooligan brawl coming to an abrupt end. The graphic tee also features CCTV style text highlighting the original September 2005 release date of the film. 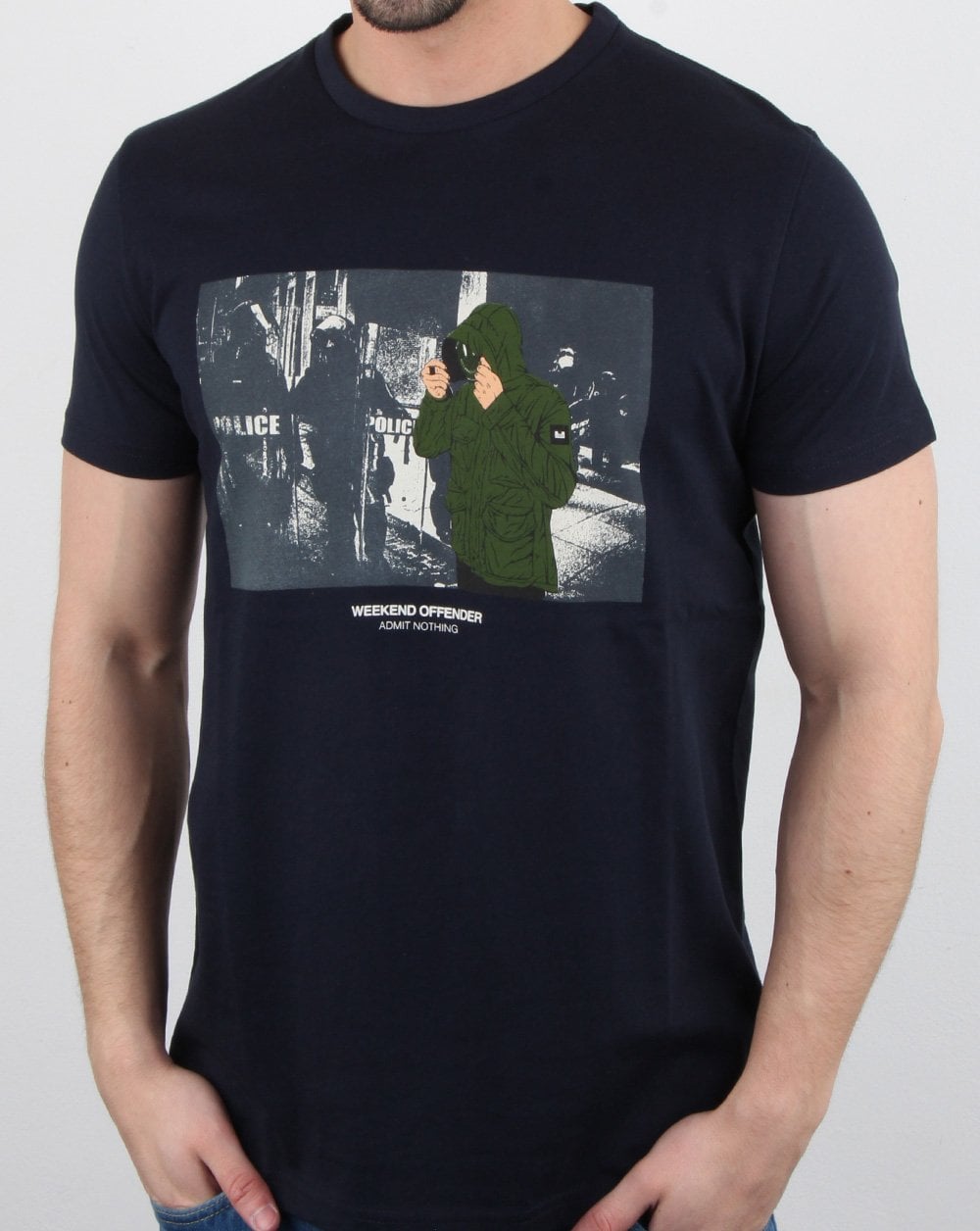 We’ve also just introduced the Weekend Offender Smiley t-shirt which features greyscale riot police in the background with an illustration of a person wearing the recently launched Weekend Cactus Devito jacket. The Cactus Devito jacket features a mesh face mask which is integrated into the peak of the hood with an Acid House inspired smiley face to the front. 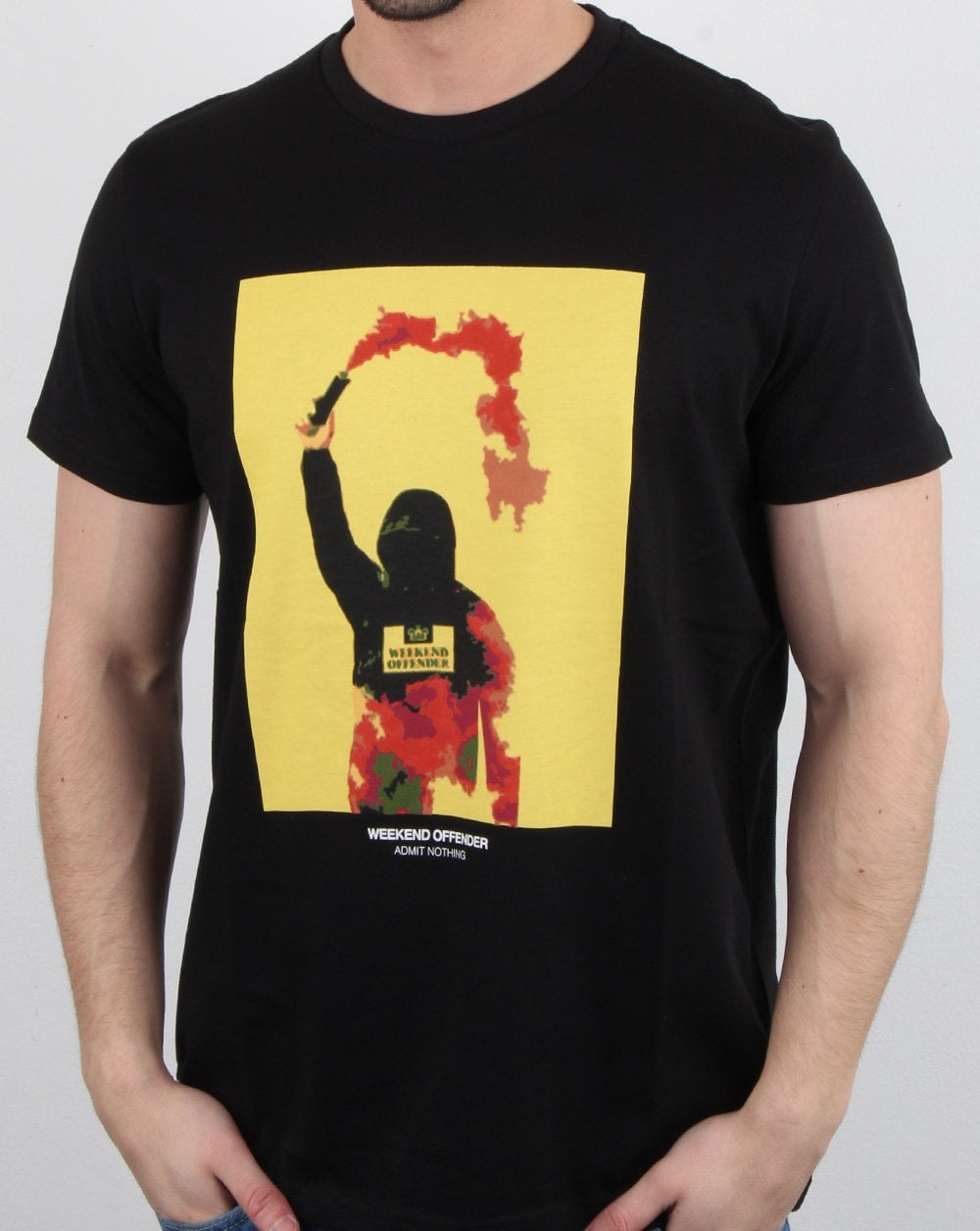 Other new graphic tee styles from the latest Weekend Offender collection include the Flare t-shirt which features a typical scene at a football ground across the continent with an Ultras fan holding a red flare. There’s also the Weekend Offender Spines t-shirt which goes for more of a musical direction with a celebration of British indie and electronic music artists that are associated with the UK’s casual scene. The tee features an assortment of record sleeve spines from the likes of The Chemical Brothers, Inspiral Carpets, Oasis, The Stone Roses, The Smiths, Kasabian, The Arctic Monkeys, The Verve, Primal Scream, New Order, The Farm & The Libertines. 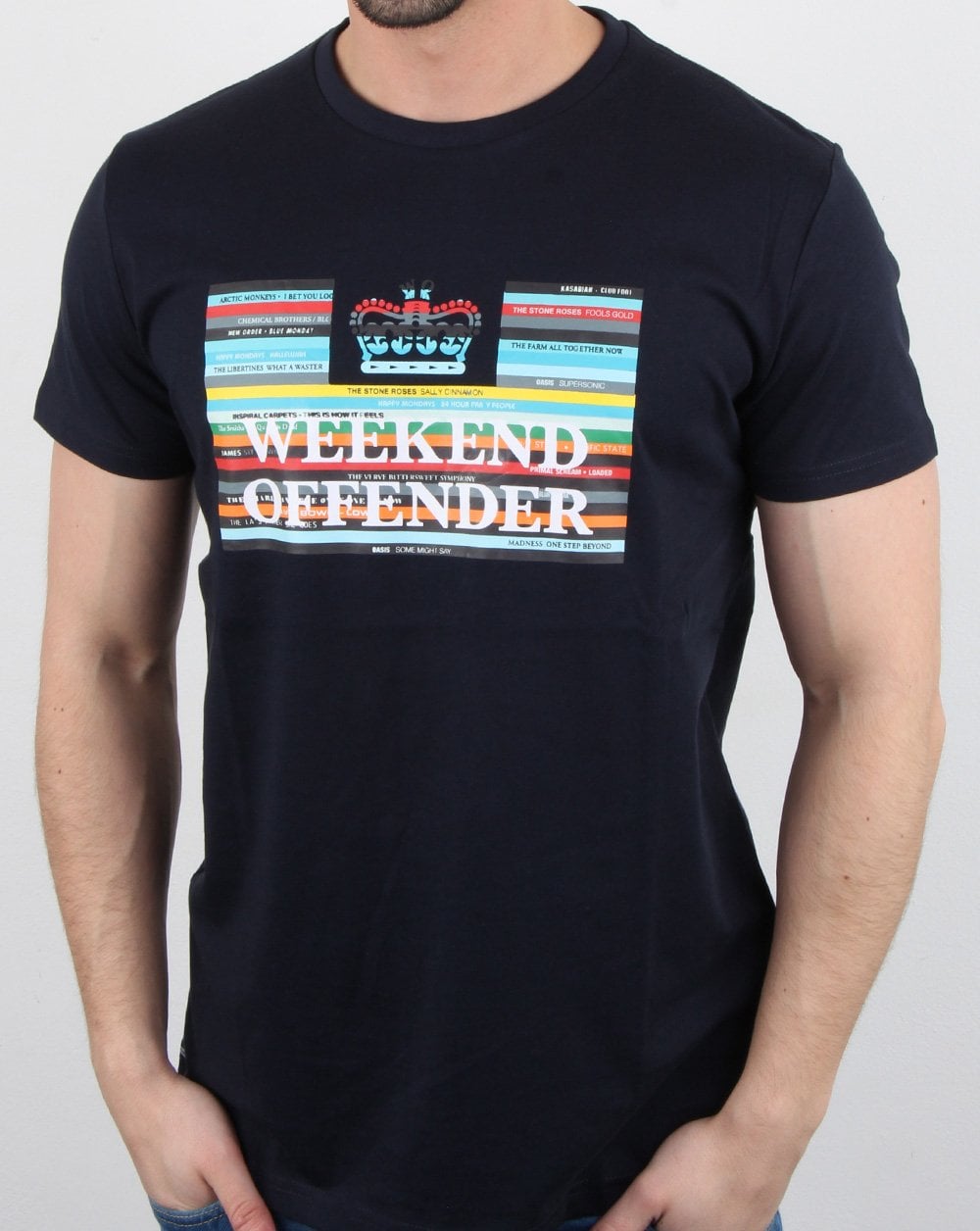