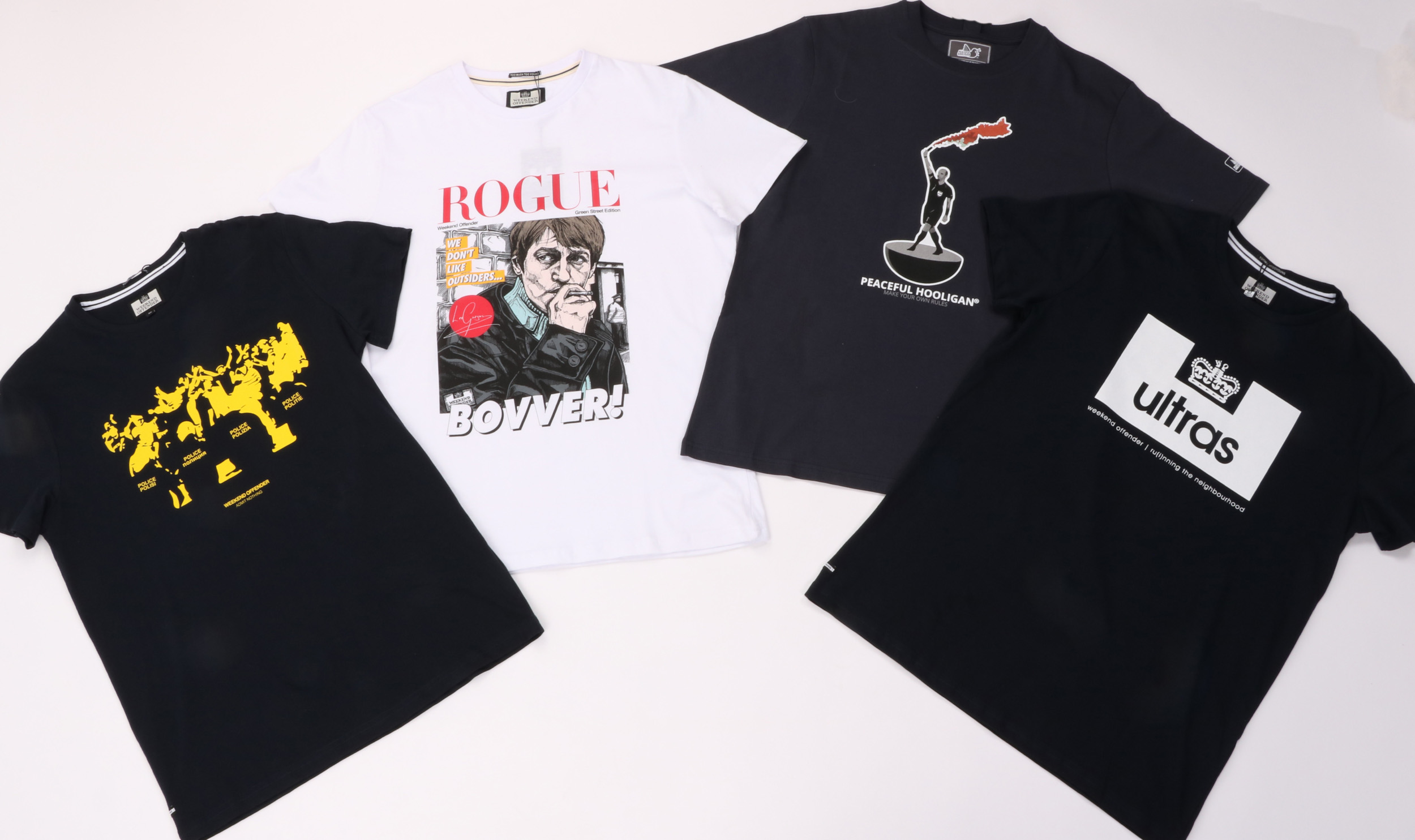 You’ll love out our latest collection of casual tees at 80s Casual Classics including the latest Weekend Offender Bovver t-shirt.

We all love a bit of Bovver don’t we, the hardcore West Ham hooligan played by Leo Gregory in Lexi Alexander’s Green Street from 2005. Bovver wasn’t scared to get stuck in when it came on top with the likes of Birmingham’s Zulu’s, Man Utd’s Red Army or Millwall’s Bushwhackers. Alongside Top Dog, Cass and the more recent Once Upon A Time in London (now streaming on Netflix), Bovver has got to be one of Gregory’s most memorable acting moments portraying the Stone Island wearing, chain smoking, GSE number 2. Following on the success of the previous Weekend Offender Bovver t-shirt, the Cardiff born terrace brand has now introduced more Green Street movie nostalgia with the Weekend Offender Rogue Bovver t-shirt which features a signed illustration of Leo Gregory from Green Street with Gregory’s famous lines from the film “We Don’t Like Outsiders”. 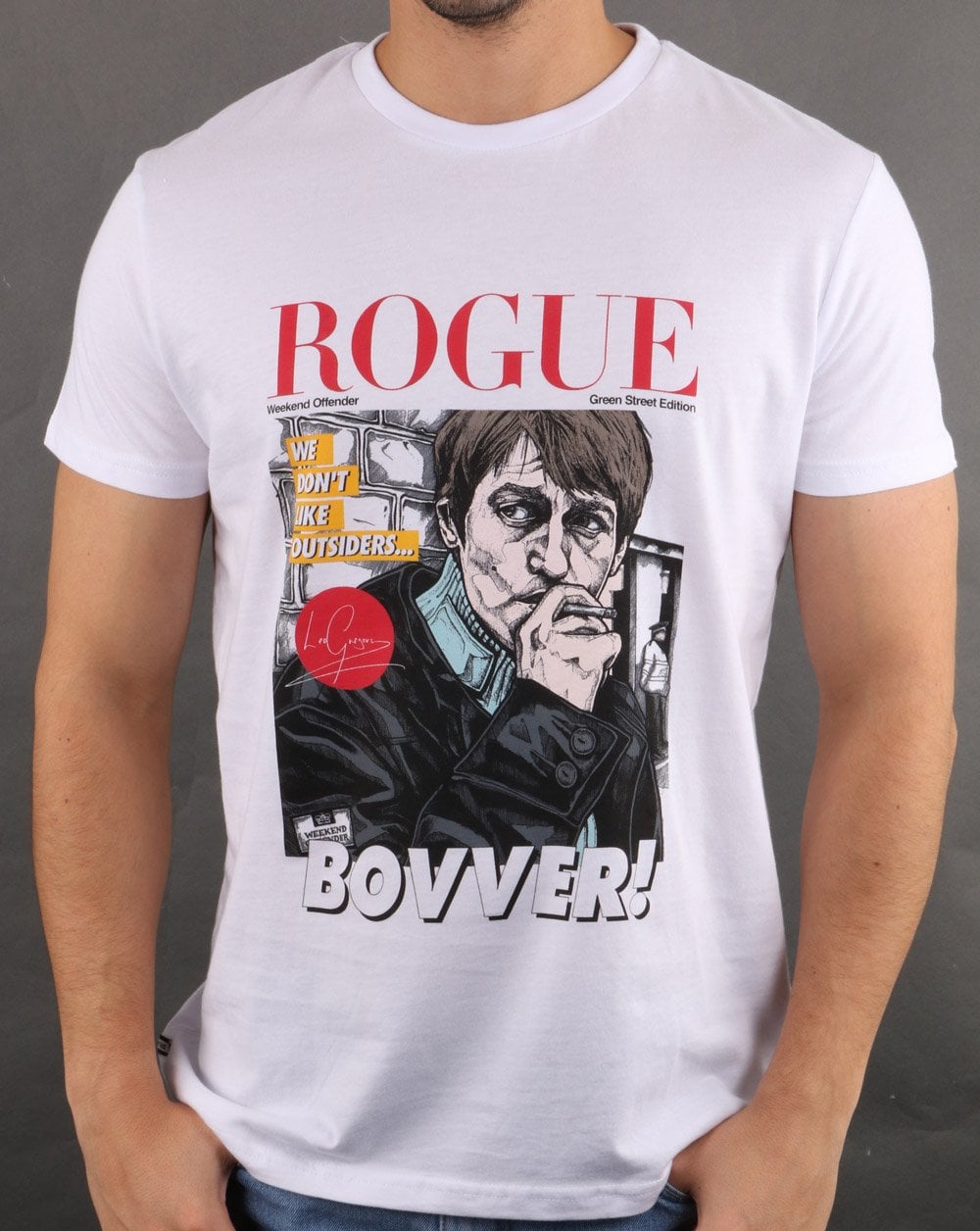 We’ve also introduced other new Weekend Offender styles with the Ultras t-shirt which pays homage to the fanatical football fans across the world who are known for their flares, flags and die hard supporters. Stadiums across the world are lit up with colourful pyrotechnics and tribal chanting when the Ultras attend football games in their masses. Other Weekend Offender styles include the Riot t-shirt which celebrates the brands 15th year anniversary with the re-release of an archive style from 2004. The Riot t-shirt features a typical football riot scene with Weekend Offender’s signature slogan ‘Admit Nothing’ and various translations of police from Italy’s Polizia to the Netherlands’s Politie. 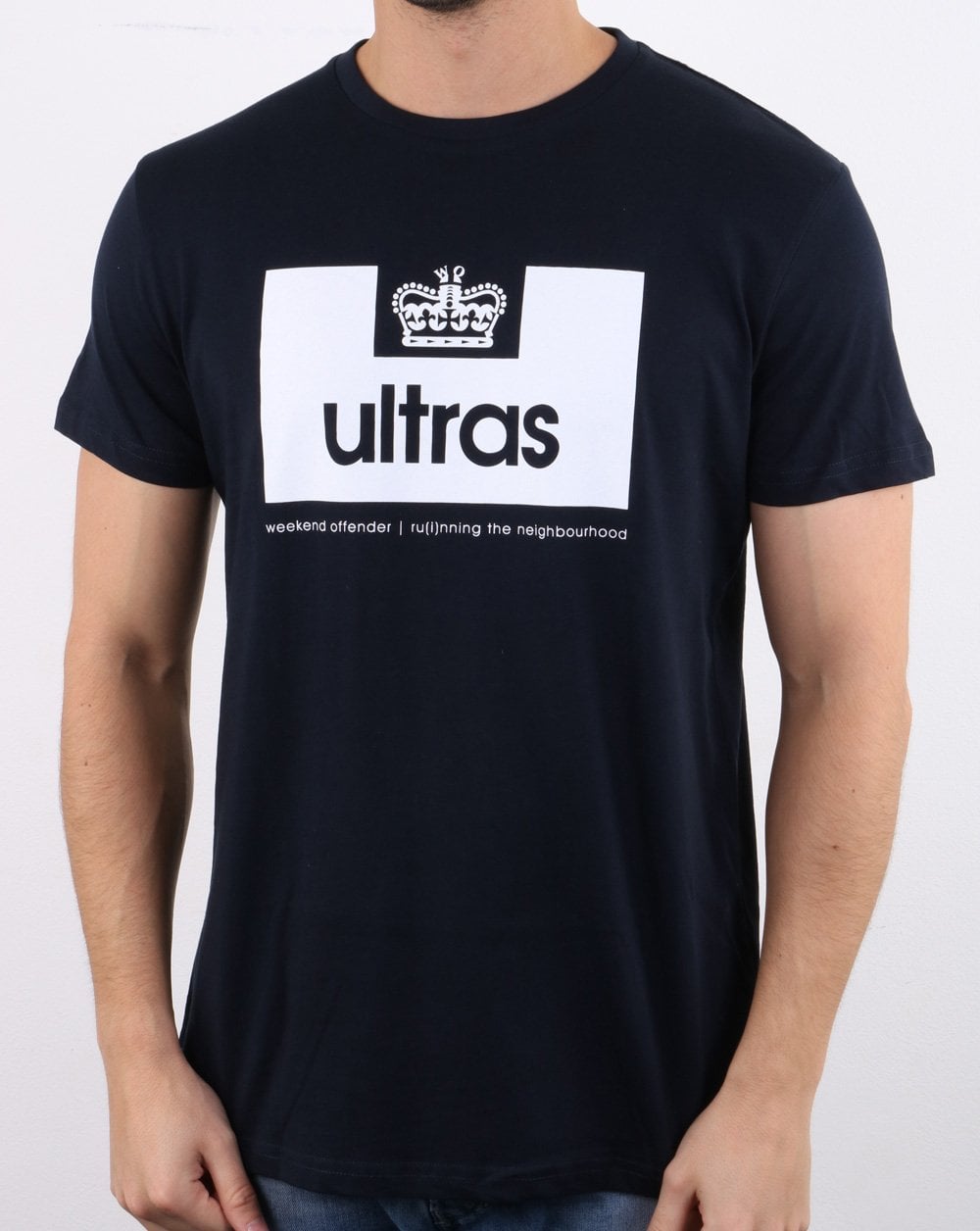 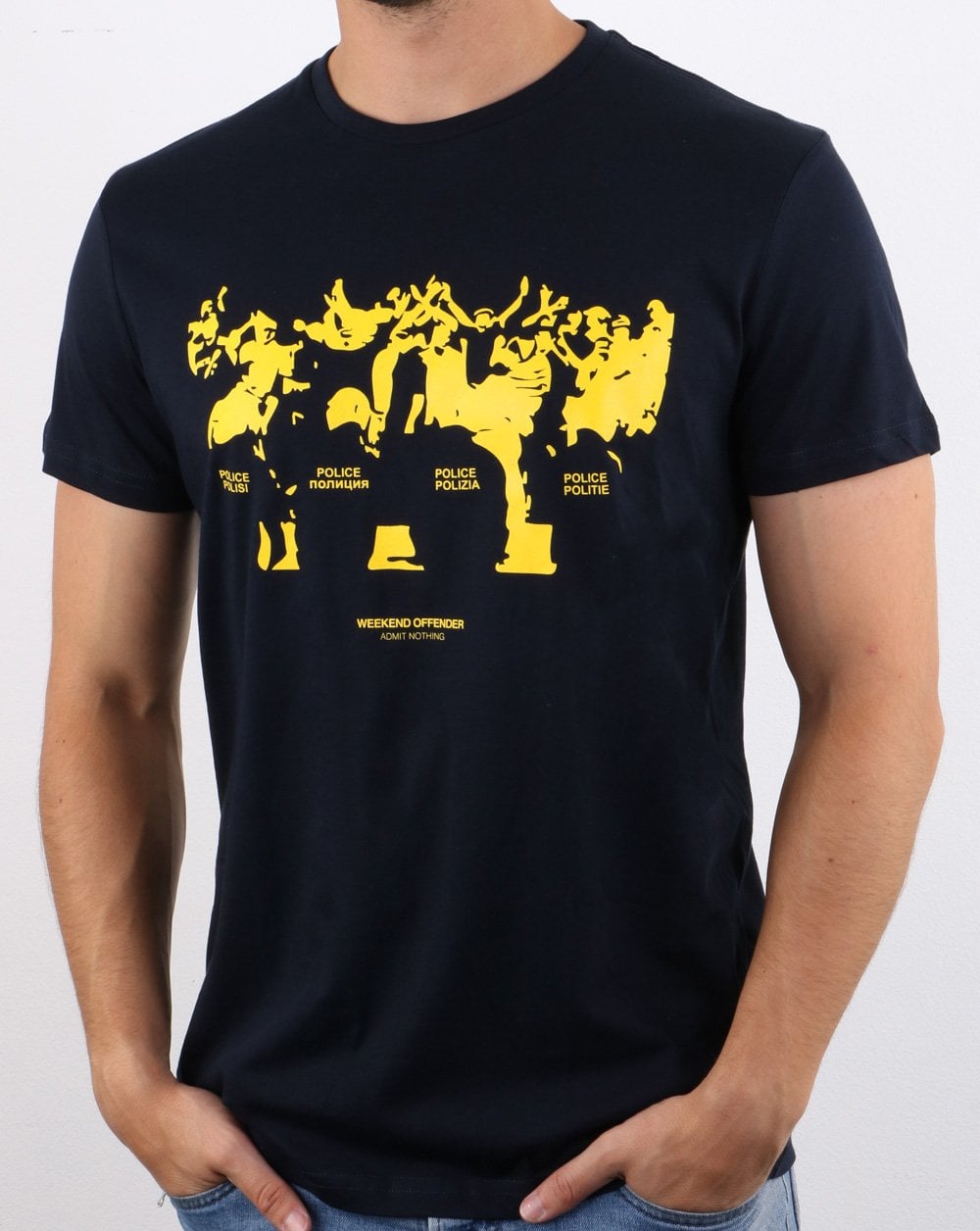 Alongside Weekend Offender we’ve also now introduced a range of casual tees from Peaceful Hooligan. With a brand name sounding something like the chilled out version of Cass Pennant, Peaceful Hooligan are a British terrace brand that focus on quality rather than trends. Drawing inspiration from the terraces, the rave scene and British pub culture, Peaceful Hooligan have built a loyal fan base across the UK and the continent with their own casual spin on a range graphic tees. Highlights from the latest Peaceful Hooligan t-shirt collection include styles the like the Referee tee which features a Subbuteo style referee holding a flare. For those who aren’t familiar with the popular table football game, Subbuteo was huge throughout the 70s & 80s and allowed the player to re-enact real football tactics as well as coming with a range of add-ons available from football terraces to trophies. 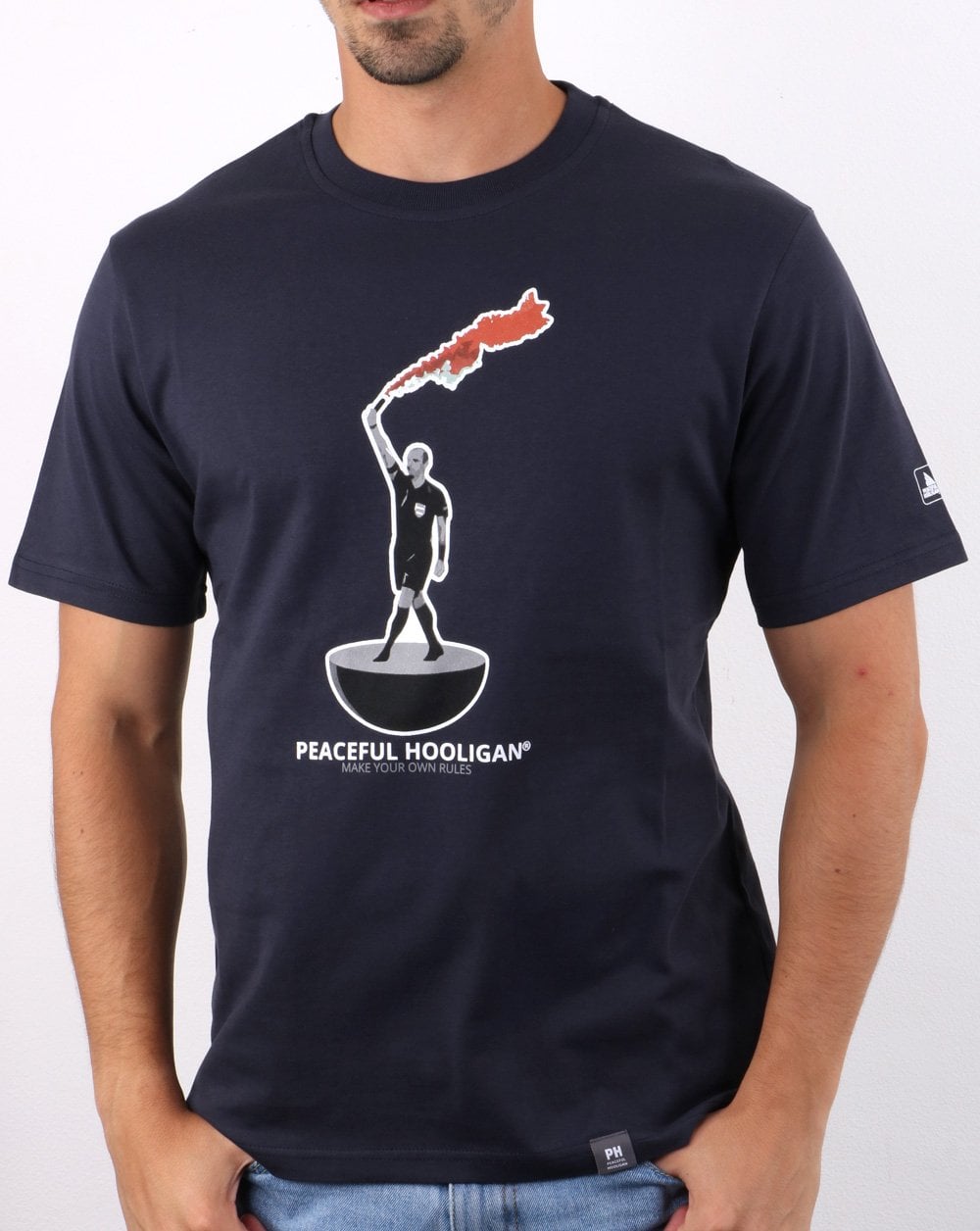