X
This site uses cookies to provide and improve your shopping experience. If you want to benefit from this improved service, please opt-in.
More Info
Accept Cookies
80's Casual Classics80's CC NostalgiaEverything You Need To Know About The PUMA Ralph Sampson Trainer
Menu

Everything You Need To Know About The PUMA Ralph Sampson Trainer

The PUMA Ralph Sampson trainer continued the basketball legacy of the German sportswear brand throughout the 1980s.

The legacy of the PUMA Ralph Sampson trainer goes way back to the 1970s with the dominance of the German sportswear brand on the basketball court and the rise of the legendary PUMA Suede silhouette. The Suede had already set the bar as far as indoor court trainers could go, and the Basketball connection went to all new levels courtesy of Walt Frazier and the Clyde trainer in 1973. The street connection was officially born and PUMA became the king of the courts from the Bronx to Brooklyn.

Moving into the 80s, the basketball trainer competition really hotted up with rival sportswear brands’ Nike, adidas & Reebok also looking to cash in on the ever growing basketball trainer market. Nike introduced the Air Force 1 in 1982 and then the Jordan range in collaboration with Michael Jordan of the Chicago Bulls in 1985. adidas on the other hand gave us a range of performance basketball styles such as the Rivalry Low in collaboration with Patrick Ewing of the New York Knicks in 1986. It would be fair to say that the 80s gave us some of the most iconic basketball trainer styles of all time. Following the legacy of the Clyde, PUMA looked to Ralph Sampson of the Houston Rockets for their next basketball trainer endorsement. In 1983 the German sportswear brand introduced the PUMA Ralph Sampson trainer. 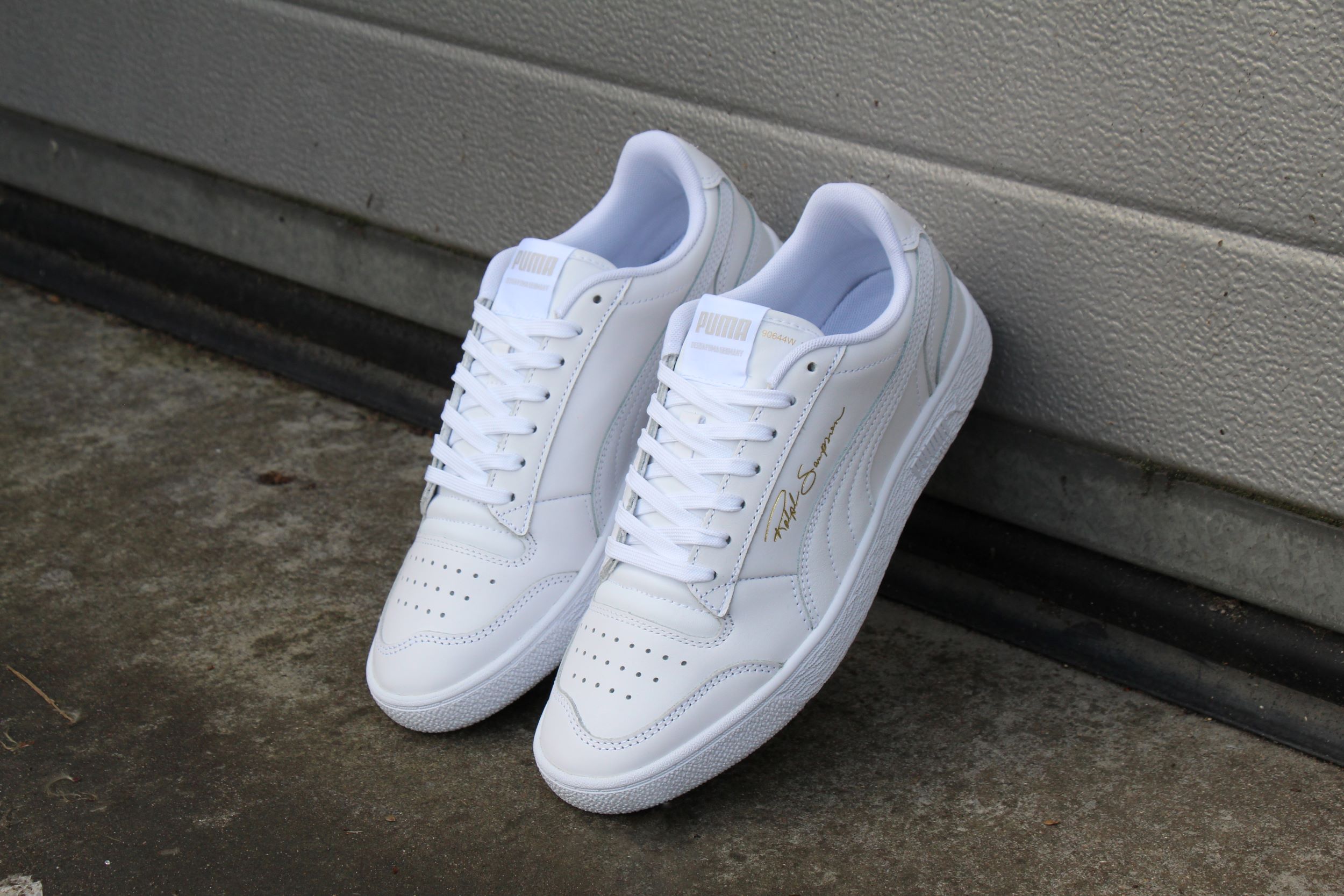 The Houston Rockets player & NBA Hall-of-Famer stood at a staggering 7 feet 4 inches tall and in 1983 was considered one of the most respected players and highest earners in the sport. Originally released in high top form, PUMA had to create a size 17 shoe for the NBA giant. Using their expertise and trainer court know how, PUMA created the ultimate shoe for speed & grip, built for acceleration and traction during the lightening fast games of the National Basketball Association. The Ralph Sampson trainer really made its mark throughout the 80s for its stability and durability. The OG high and low versions both featured suede uppers and were designed with the help of Sampson’s expertise on the court and knowledge of the sport. 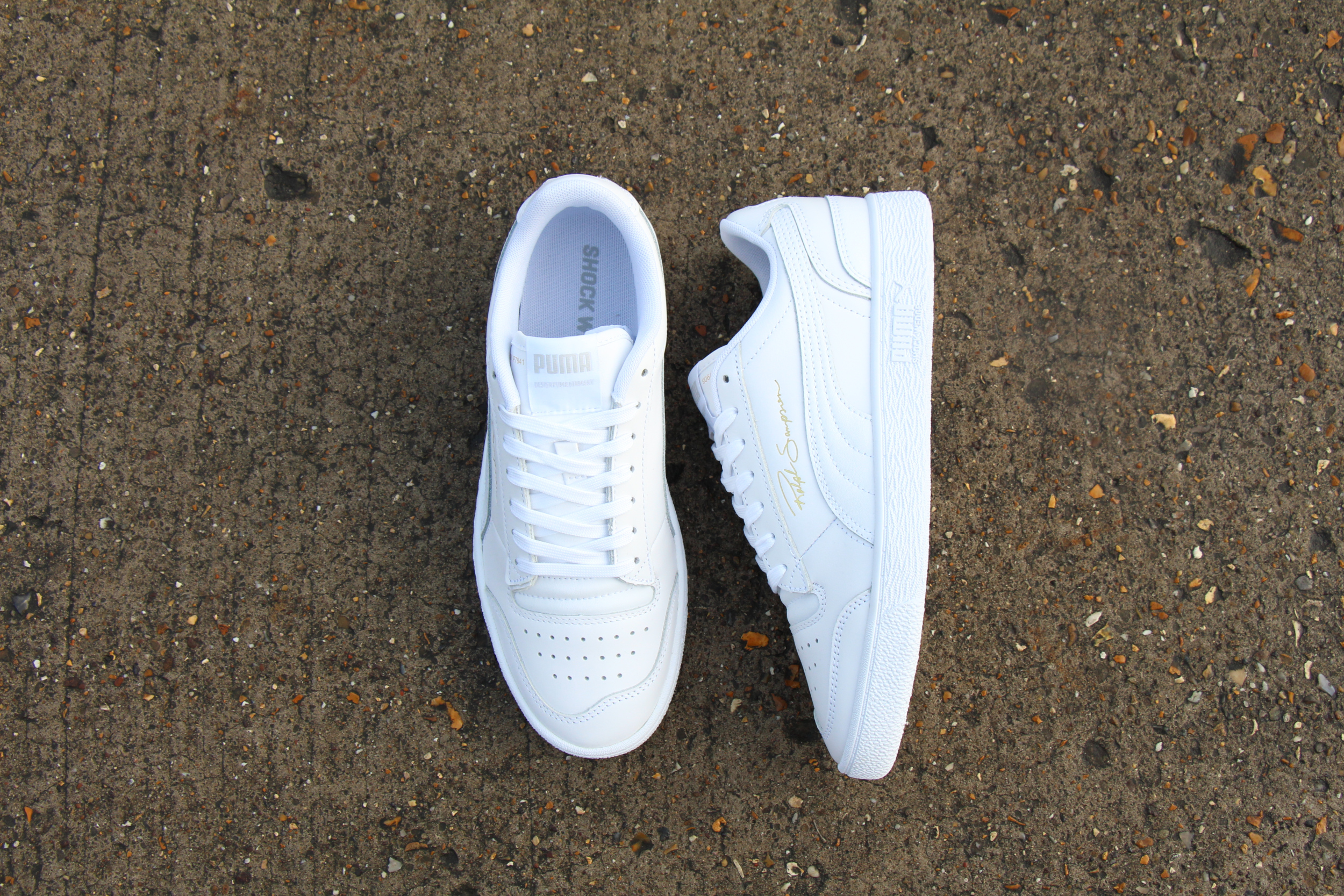 The PUMA Ralph Sampson trainer is now revived from the Herzogenaurach footwear archives for a very special re-release of the iconic 80s basketball shoe. Now introduced in low form to 80s Casual Classics, the Ralph Sampson is revived in a clean all white version with updated leather uppers for a premium take on the OG basketball shoe. Highlights of the 80s court classic include perforations to the toe vamp for added breathability with the addition of the iconic PUMA track stripe branding to each side. The trainer is finished off with ‘Ralph Sampson’ in gold foiling to the lateral side and a rubber outsole for extra grip under foot. A great addition to any retro collectors footwear wardrobe.