X
This site uses cookies to provide and improve your shopping experience. If you want to benefit from this improved service, please opt-in.
More Info
Accept Cookies
80's Casual ClassicsTrainersBack To The Old Skool: The Return Of The adidas Super Samba
Menu 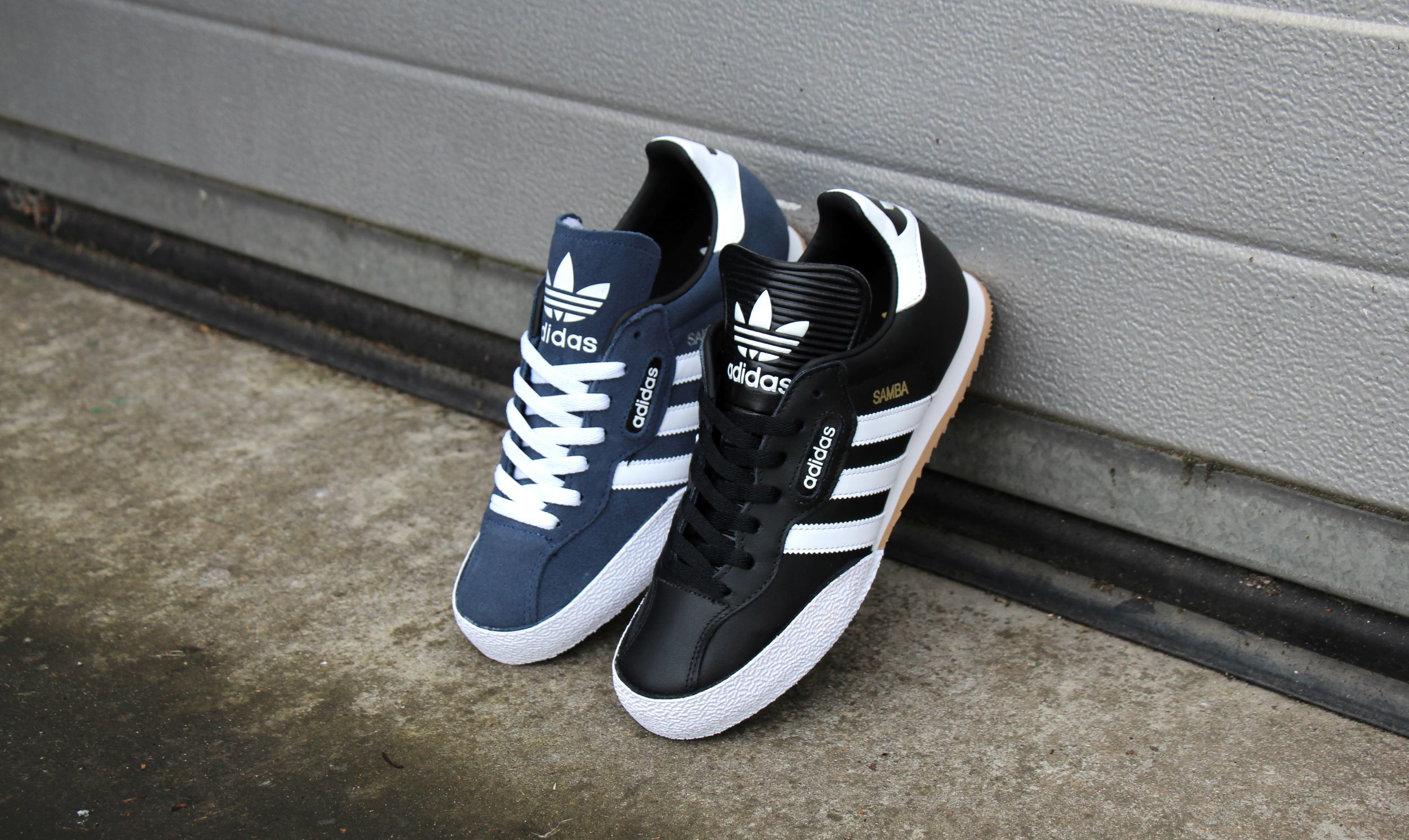 Back To The Old Skool: The Return Of The adidas Super Samba

The Superlicious Super Samba reminds us of the golden era of 3 stripes and now returns in OG form for the latest season.

Before we had internet retailers, raffles and resale sites the world of adidas & 3 stripes was a very different place. adidas trainers and the casual youth culture which surrounded them was predominantly a UK thing. With regions like the North West flying the 3 stripes flag throughout the late 70s & early 80s thanks to independent sportswear stores like Wade Smith, a new footwear legacy was born. This 3 stripes obsession would lead to styles like the adidas Samba trainer becoming the first adidas shoe you saw someone wear at a gig, the first adidas shoe you saw playing football in the school yard or simply the first adidas shoe you ever owned. Considered by many as one of the most respected adidas trainers of all time, the adidas Samba is quite simply an icon in itself. Following the release of the original Samba, the trainer saw various versions and updates released over the next few decades. The 80s welcomed the introduction of the ‘Super’ version of the indoor training shoe with the adidas Super Samba trainer.

Following the huge success of the original Samba silhouette which sits just under the Stan Smith as the second biggest selling adidas shoe of all time, the Super Samba put a whole new soccer spin on the classic football training style. A popular style with the casuals in the 80s for its football heritage, the Super Samba featured a larger and more prominent ribbed tongue than its older sibling. The Super Samba marked a new chapter for the Samba shoe with added features like the signature rubber toe cap to the front and the option of suede or full grain leather uppers. 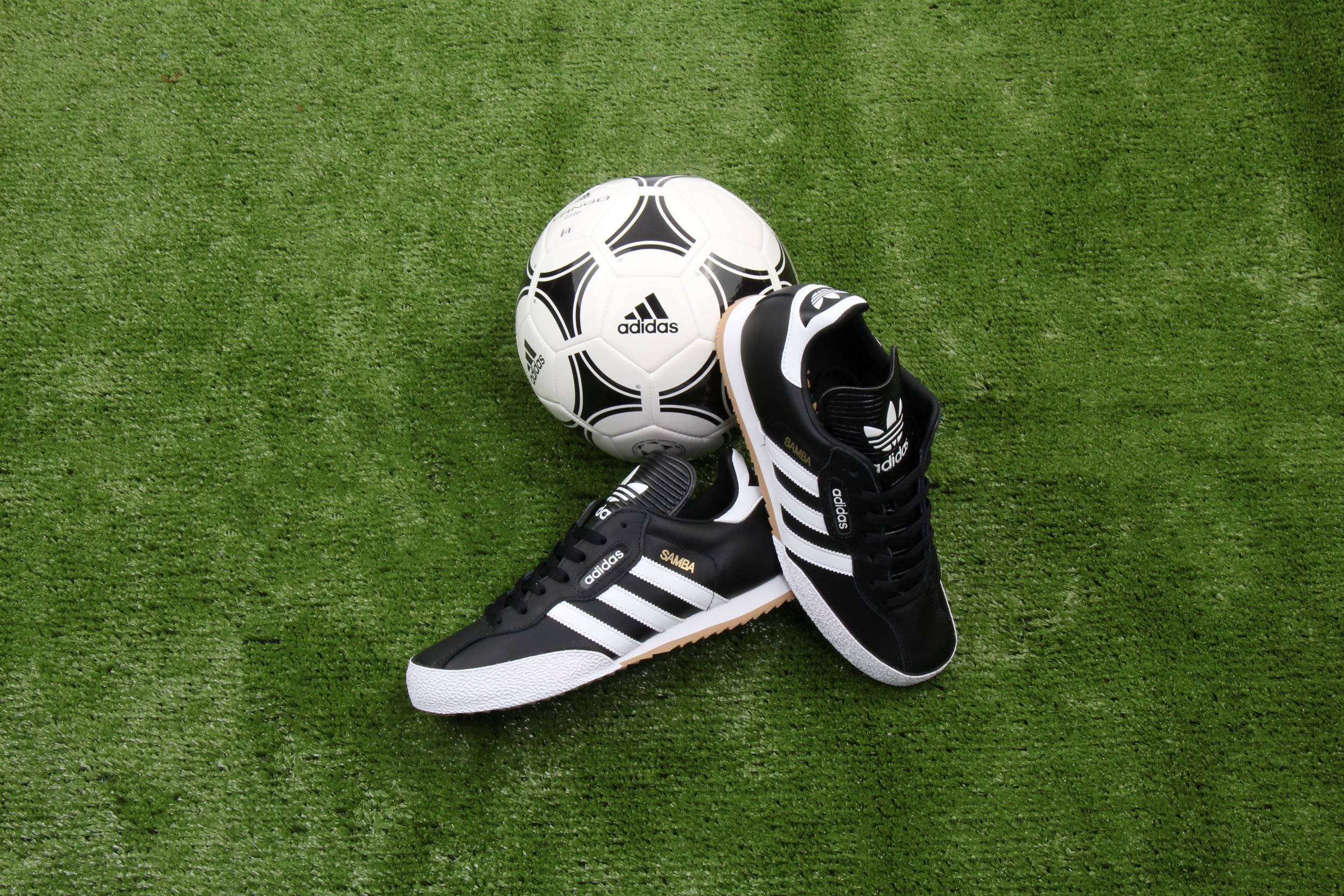 The Super Samba has also featured in numerous British films such as Pat Holden’s Away Days from 2009 with the trainer regularly appearing on the feet of ‘the pack’ throughout the film. Alongside its original casual connection from the 80s, the Super Samba was also a big 90s trainer for adidas. The Super Samba had a huge presence within the 90s Britpop scene and was a regular sight at gigs on bands and fans. The shoe also featured in Danny Boyle’s cult classic, Trainspotting, from 1996 with Mark Renton (Ewan McGregor) seen wearing a pair of Super Samba’s in the opening ‘choose life’ scene with Iggy Pop’s ‘Lust For Life’ playing in the background. 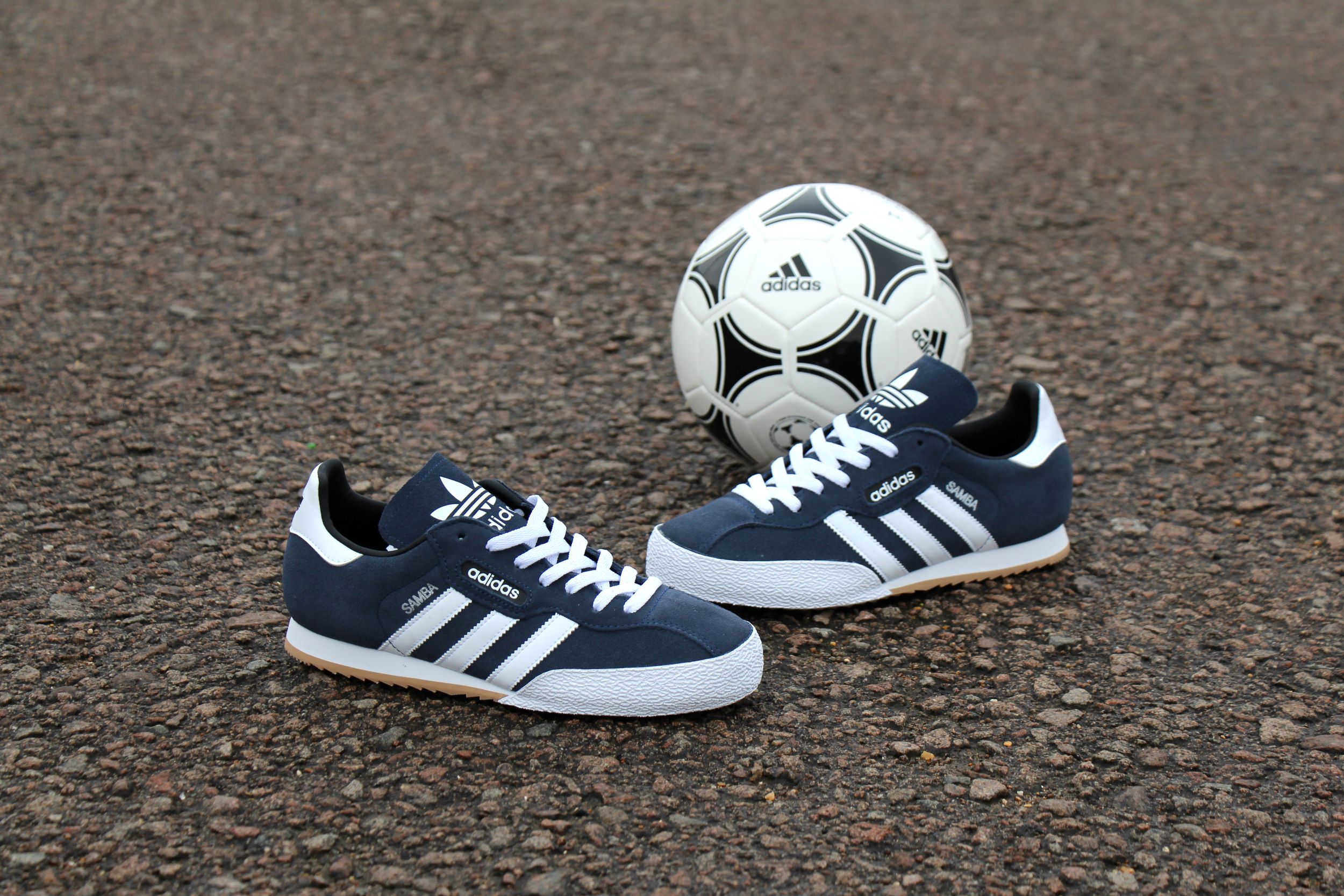 The old skool adi’ classic now returns to 80s Casual Classics in both the sought after suede and leather versions. The iconic football silhouette features the famous chunky rubber toe cap to the front, retro adidas branding & the signature 3 stripes to the sides. Other features include a large ribbed tongue with original trefoil branding alongside ‘Samba’ in gold foiling to the outer sides. The adidas Super Samba is a must have style for any classic adidas trainer collector or fan.