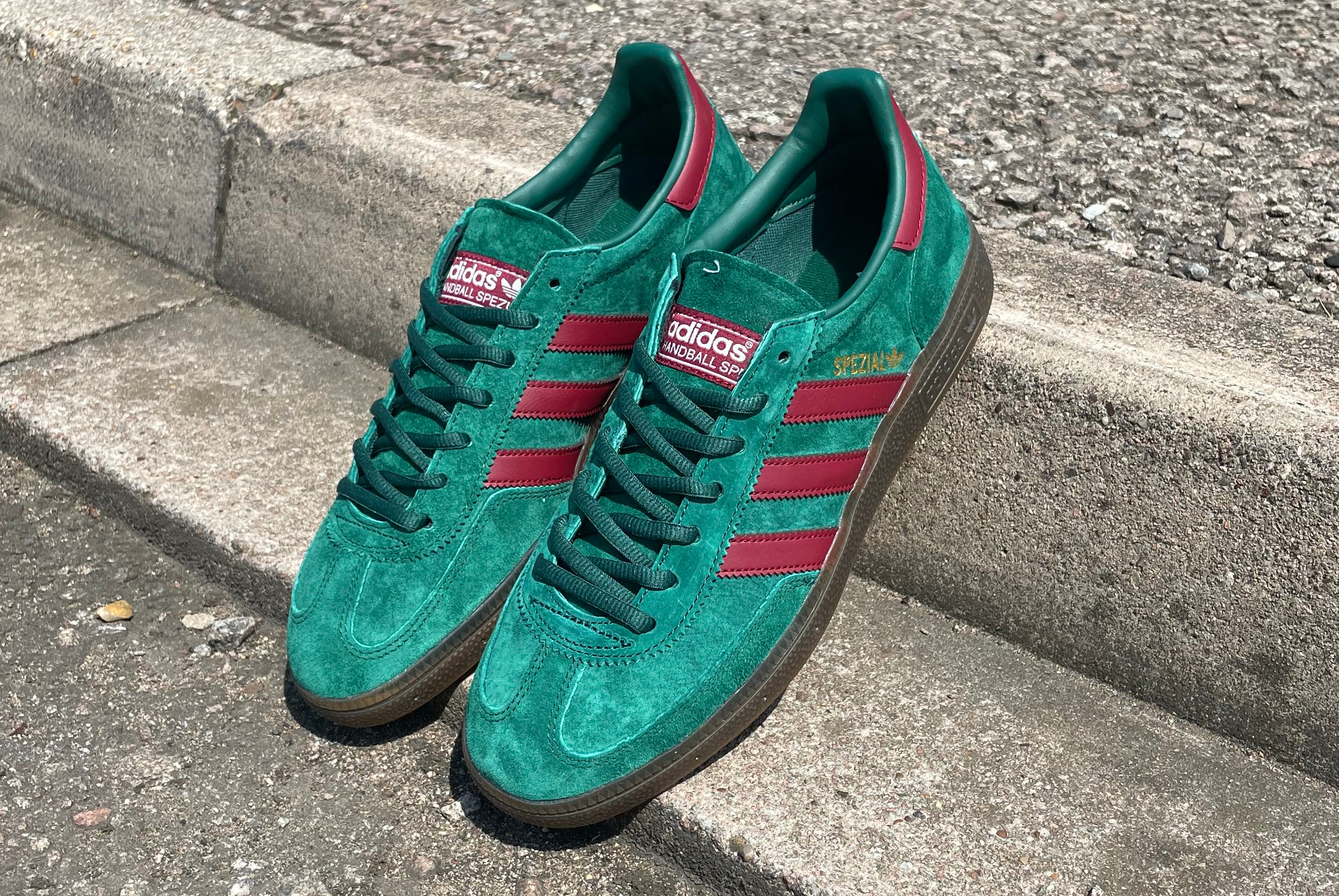 The adidas Handball Spezial Trainer Gets The Collegiate Green Treatment

If we’re going to talk about some of the most iconic colourways of all time from “die Marke mit den drei Streifen”, their classic green shade more commonly known as “Collegiate Green” has surely got to be up there. The adidas Stan Smith, the adidas Forum Low, the adidas Rom & the adidas Country were all built on the core foundations of Collegiate Green whether it was on the stripes or simply on the heel tab. The darker shade of green just screams classic adi’ and brings back fond memories of the original box fresh styles long before the Originals label was even a thing. From classic windbreakers to the vintage bowling bags, anything classic adidas in Collegiate Green just has a certain look about it you can’t really get anywhere else. As you probably already know the majority of classic adidas trainers from the 1970s & 1980s have a unique colourway associated with them. For example the original Hamburg was navy, the Malmo was yellow & the adidas ZX 8000 was aqua. In the case of the adidas Handball Spezial it was in the iconic light blue colourway which was re-released a few years ago. This time around however the iconic indoor court trainer gets the classic Collegiate treatment with the introduction of the adidas Handball Spezial Collegiate Green trainer. 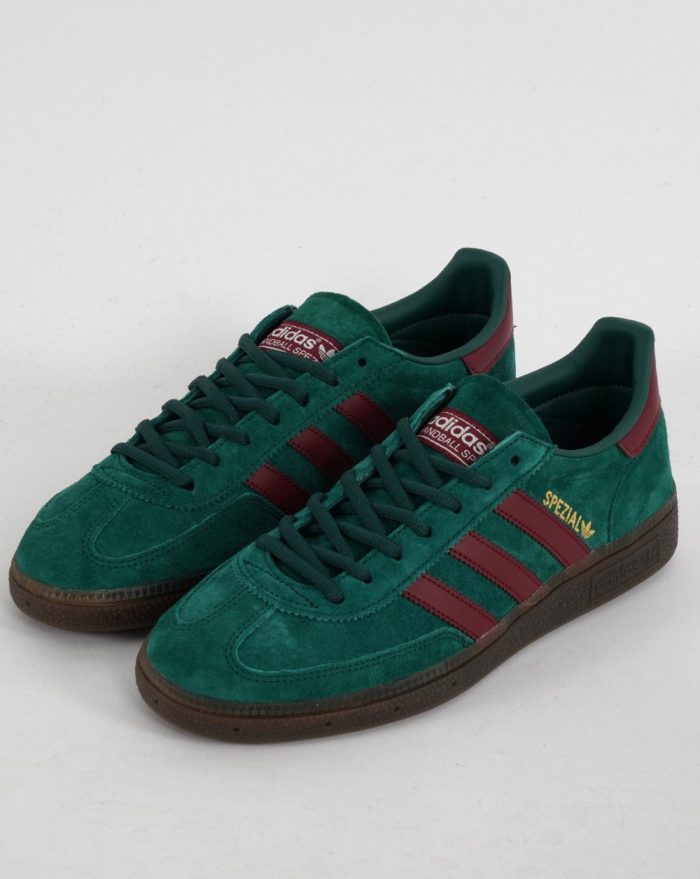 Built for speed and grip on the speedy handball courts of Germany & Europe, the adidas Handball SPEZIAL was originally released back in 1979. A pinnacle time in casual fashion the 3 stripes style quickly became one of the most desirable for football fans across the UK. Whereas the Kick, the Samba & the Mamba were all geared up for football, the Handball Spezial (as the name clearly implies) was the Handball-Bundesliga’s answer to the perfect performance shoe. The Handball Spezial has seen various countries of manufacture since its release back in the late 1970s such as West Germany, Slovakia, Poland & France. It’s notable light blue colourway & contrasting white stripes gave the trainer its own unique identity with some OG models branded as ‘Handball Spezial’ to the sidewalls as oppose to the shortened ‘Spezial’ we see today. The original Handball trainer from adidas also started a legacy of indoor handball shoes from the 3 stripes brand such as the Handball Top which arrived 8 years later in 1987. 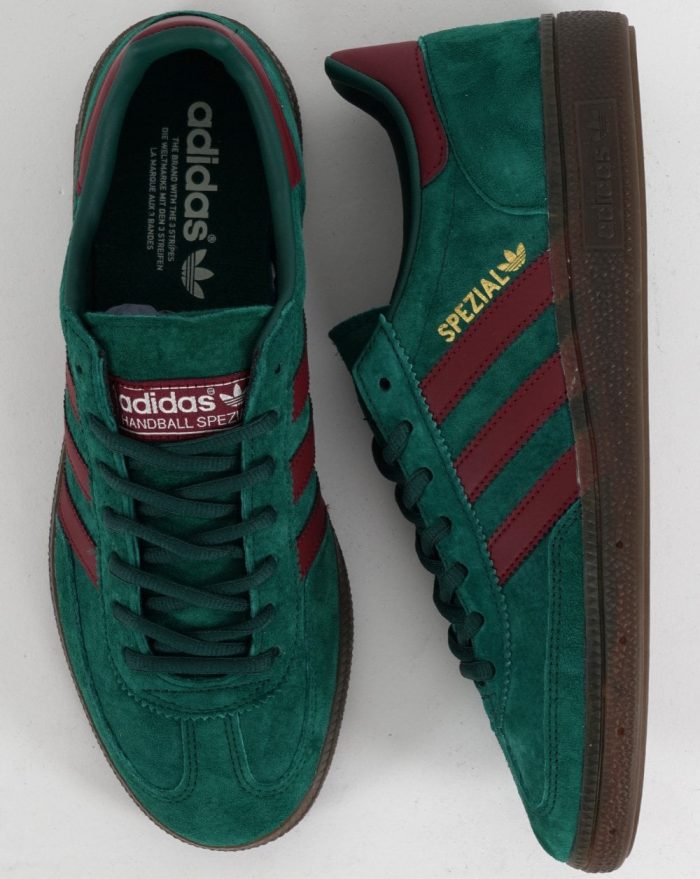 Revived again from the adidas archives, the Handball SPEZIAL returns in that classic Collegiate Green colourway. Highlights include premium suede uppers, the famous durable gum sole unit built for traction and speed, T-Toe detailing to the toe box with contrasting heel tab and 3 stripes to the sidewalls in burgundy. Finished off with ‘SPEZIAL’ in gold foiling to the side walls as well as original adidas trefoil and ‘Handball Spezial’ branding to the tongue tab. Shop the latest adidas trainer releases now at 80s Casual Classics via the links.