The adidas Hamburg Trainer Gets Treated To A Tech Purple Update

The adidas Hamburg Tech Purple trainer gives a nod to classic adi colourways with a fresh iteration of the early 80s 3 stripes classic.

Those who know their Tahiti from their Trimm Trab from their TT Super will know the significance of certain adidas trainer styles. The world of 3 stripes is constantly changing & it’s always great to see adidas re-working old styles whilst also introducing brand new silhouettes to their ever growing brand roster. However, for many die hard 3 stripes fans & adidas aficionados it will always be about the classics from the golden era of 3 stripes that will always rule the roost. Take the adidas Hamburg trainer for example. It’s arguably one of the most respected and well known trainers to come off the City Series production line. The coveted City Series from adidas was all about exclusivity, limited runs and in the case of this latest adidas Hamburg Tech Purple trainer, bold & striking colourways. There’s just something still very magical about the City series for adidas trainer fans. 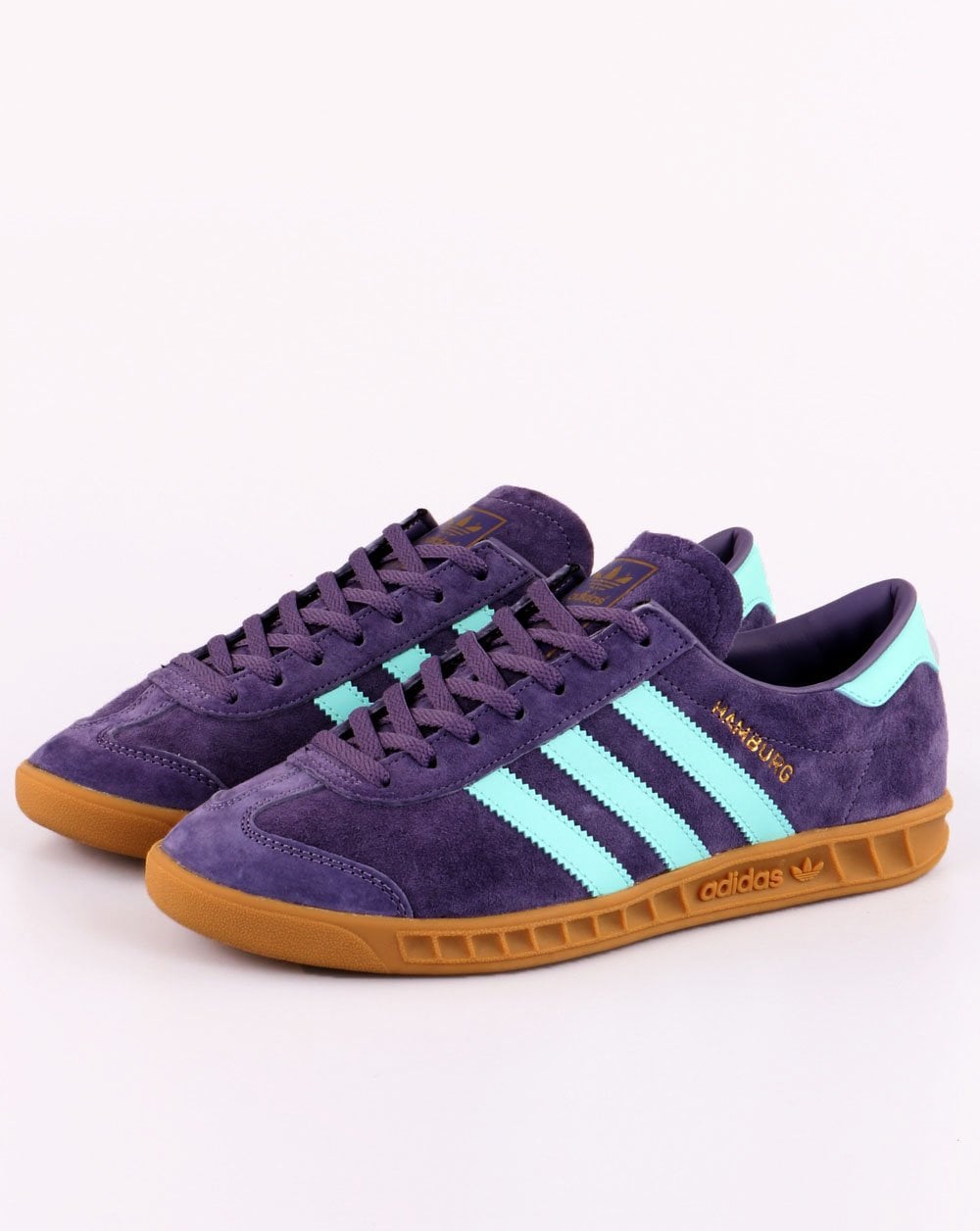 The origins of the adidas Hamburg trainer go back to 1982 with the golden era of casual 3 stripes in the early 80s. Introduced as part of the legendary City Series, the adidas Hamburg trainer took the name of the North German port city. Casual culture was in full swing with the City Series celebrating the continent just like the big British clubs were looking for European Cup glory. Other notable names from the City Series included the likes of the London, the Bern, the Berlin, the Amsterdam & the Dublin, with each shoe taking subtle traits of each city into the design inspiration. The original Hamburg trainers were made in Yugoslavia & featured the signature gummy sole unit with rich suede uppers & the famous t-toe detailing to the front. 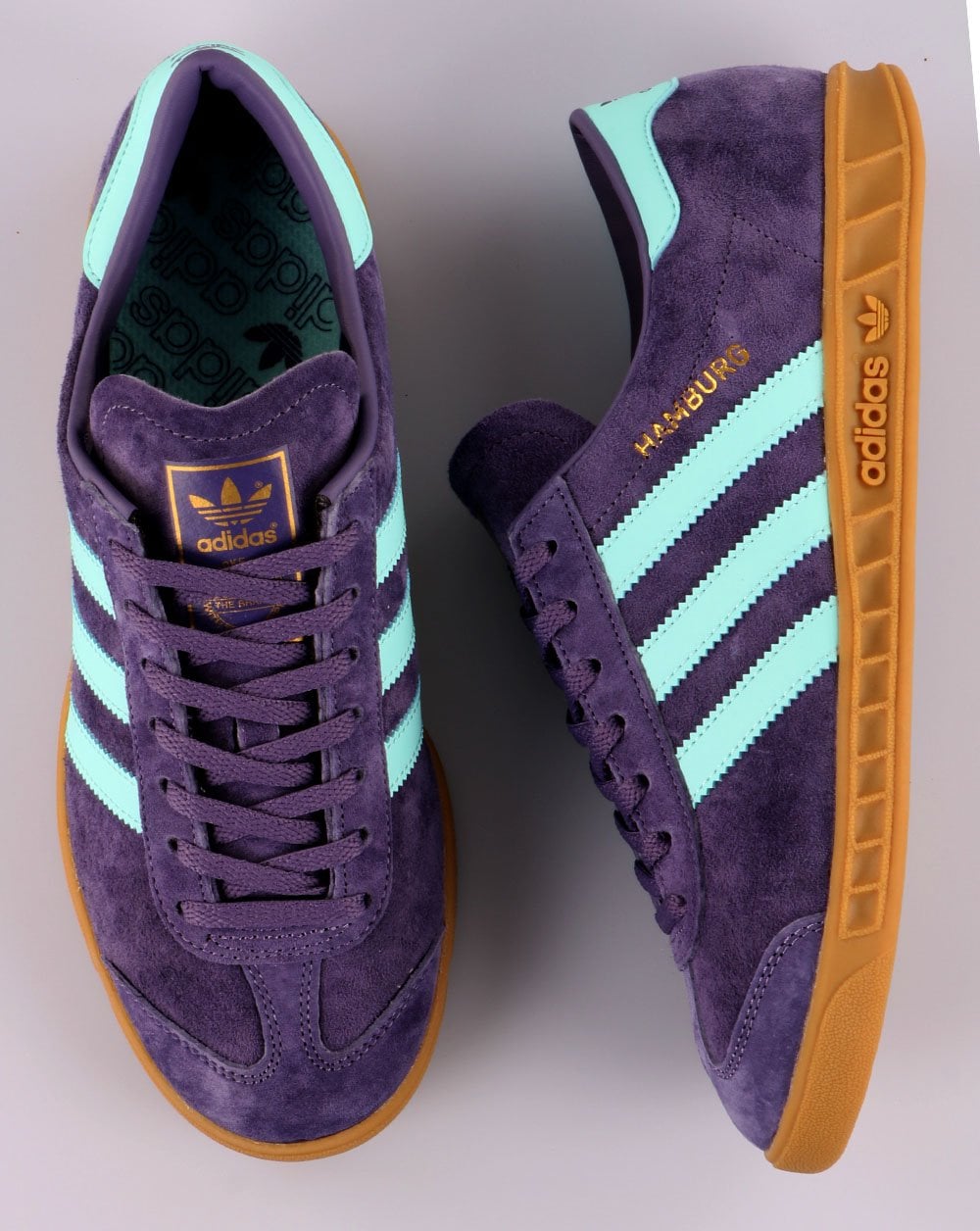 More recently adidas fans have been treated to the revival of classic City styles like Hamburg from the 3 stripes archives. The adidas City series has become, and remains, a key talking point for adidas aficionados & retro trainer enthusiasts. The German 3 stripes icon is now introduced in an updated ‘Tech Purple’ iteration for the latest season. Featuring premium suede uppers in a striking ‘tech purple’ colourway for a truly eye-catching finish. Other details include contrasting leather 3 stripes & heel tab in ‘clear aqua’ which compliment the purple perfectly. The ‘Hamburg’ lettering in gold foiling to the lateral sides & original trefoil branding to the tongue tab finishes off the continental classic alongside the signature gum sole unit for that ultimate 80s casual trainer look. 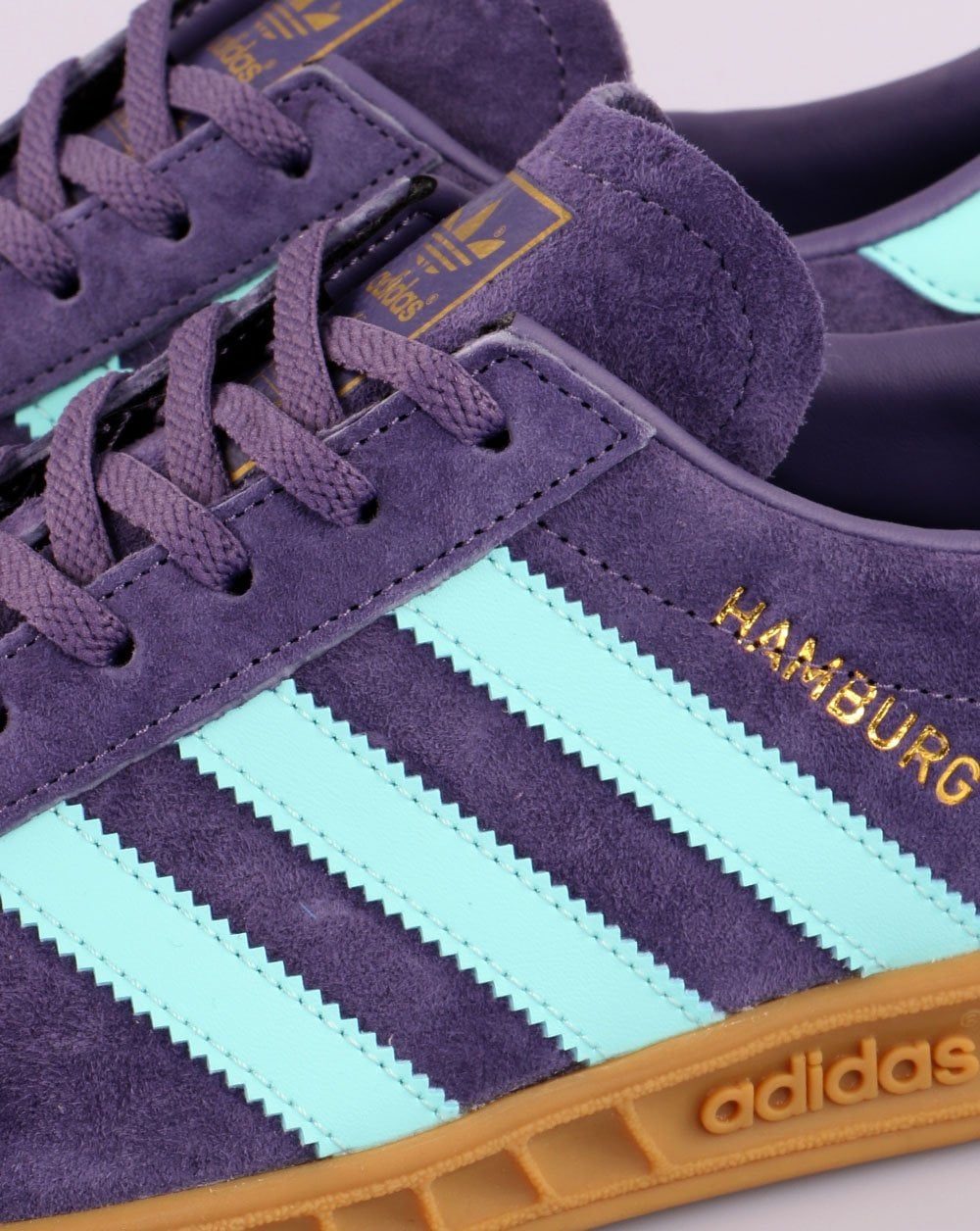