Get That Original 80s Fitness Style With The adidas Continental 80

Fresh from the 3 stripes archives the adidas Continental 80 trainer makes a return to 80s Casual Classics in some updated colourways.

Kanye West may have revived the late 80s 3 stripes fitness style to some extent with the introduction of the Yeezy Powerphase Calabasas trainer back in 2017, but the reality is the Continental 80 had no previous connection whatsoever with the American rapper/producer/entrepreneur. The adidas Continental 80 was originally released back in the late 80s, rolling off the back of other 3 stripes fitness styles like the adidas Powerphase from 1986. The Powerphase saw adidas looking to muscle in on the 80s fitness market and a response to styles like the Reebok Workout which was introduced 2 years earlier. The 3 stripes response to fitness footwear also featured white leather uppers and had a striking resemblance to the Workout, it would be fair to say adidas re-worked the Workout silhouette with their own subtle 3 stripes spin. After all adidas had already given us popular tennis styles like the Stan Smith trainer and the Forest Hills so why couldn’t they introduce a fitness/gym shoe that would rival Reebok? The Workout may have officially come first but when all said and done the Powerphase looked just as good. 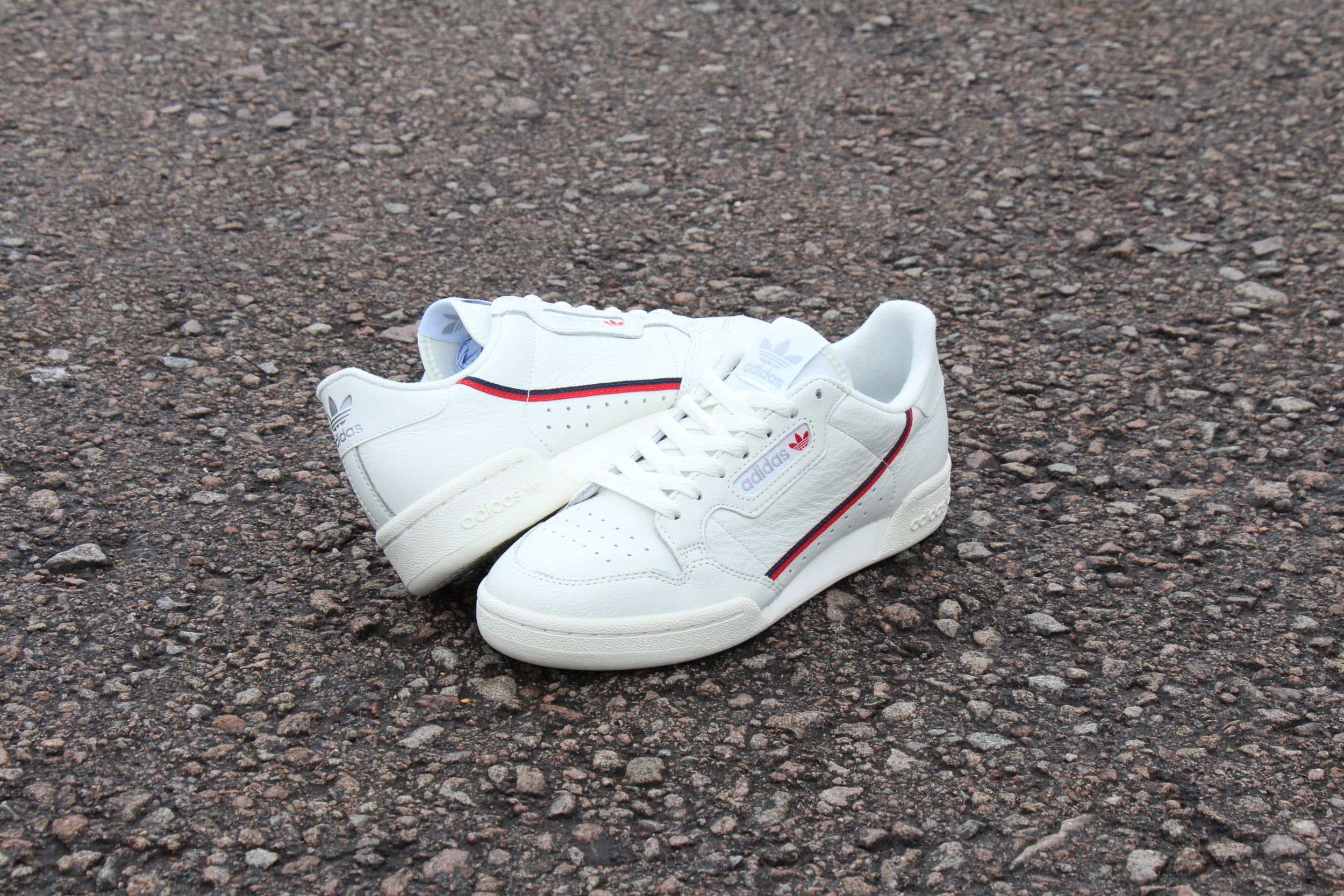 Above: The adidas Continental 80 trainers in off white now available from 80s Casual Classics.

The Continental 80 continued the fitness legacy of the Powerphase and was also released back in the late 1980s. Drawing inspiration and tennis heritage from trainers like the Stan Smith, with a more fitness focused style, the Continental 80 was also released as part of an exclusive European ‘Made in France’ release, hence the European inspired name. Up until its recent revival the retro 3 stripes style had become like gold dust with a few ‘Made in France’ vintage styles still available from trainer collectors and 3 stripes enthusiasts. Since its re-release from the adidas archives the adidas Continental 80 has become one of the most popular trainer styles from the German sportswear brand, dropping in a variety of colourways and collabs, creating a new demand for the original retro fitness trainer style bigger than ever before. 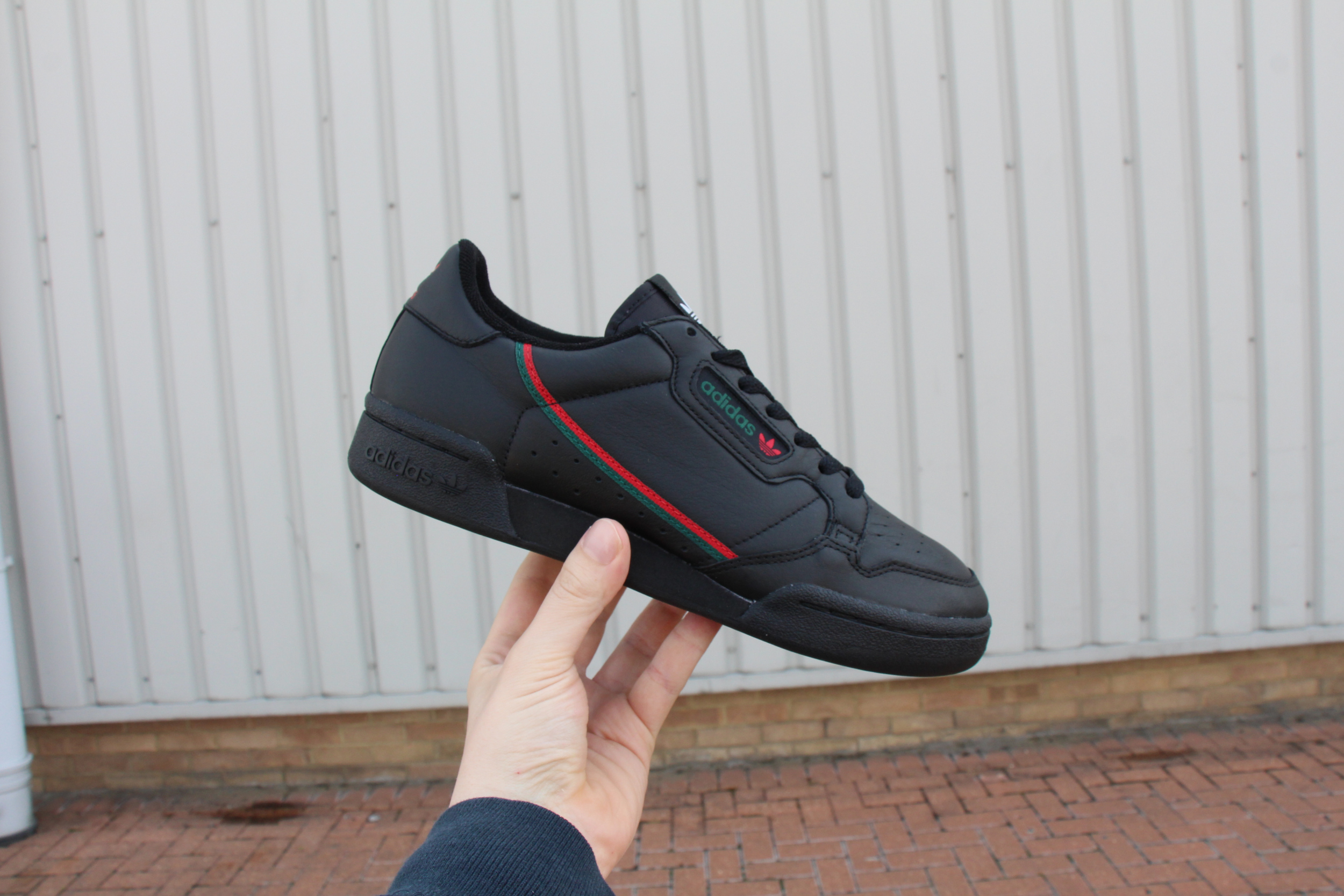 Above: The adidas Continental 80 trainers in black/scarlet/green now available from 80s Casual Classics.

After its initial release at 80s Casual Classics last year, the adidas Continental 80 is back and now returns in some updated colourways. Highlights include tumbled leather uppers for a classic retro 80s vibe with added perforations to the sides and toe vamp for breathability. A luxury touch is added to the collar with French terry cotton and an EVA insert is added to the midsole for superior cushioning and all day comfort. The classic 80s silhouette is finished off with the Continental multicolour 2 stripes to each side with original trefoil branding to the sides and tongue tab. Colourways include OG inspired black/scarlet/green and off white as well as the introduction of a new multicoloured Pride version. The Continental looks great with a pair of jeans or track pants and is a great addition to add to your 3 stripes trainer collection.